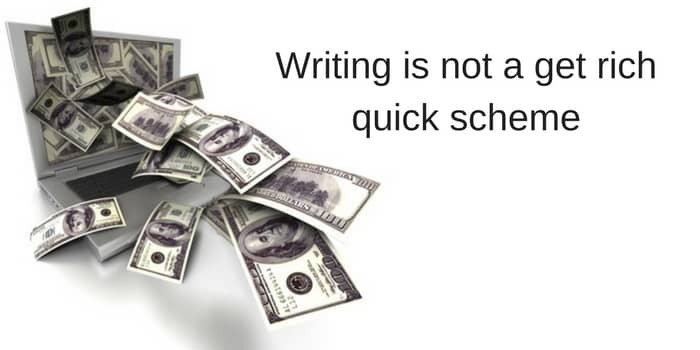 Writing will not make fast money

The biggest change to have hit the art of writing in recent years has been the expectation that by simply publishing a book, readers will rush to part with their money and buy it. Dream on.

Writing is an art form that has never been an instant cash cow for authors. The starving artist analogy works extremely well because that’s how it’s always been. Yes, there have been some famous authors who have done quite well out of writing, but there were many thousands more who were either lost in the mid-list or never published and lying in the slush pile. The list of rich writers is probably only slightly longer than rich painters, and most only joined this elite group after they were long dead.

So where did this new breed of writer come from that expects to sell a bucket load of books and make a killing just because they have published an ebook on Amazon Kindle?  Well, there are a lot of people making a lot of money out of promoting this fantastic dream and have implanted a notion that ebook publishing is a winning scheme. In my mind, the turning point was when Amanda Hocking’s success became big news. That she was a total outlier didn’t matter to many who read about, and envied her success.

From that point, the rush was on to emulate her success. Well, I’m sure a lot of people had the same idea in the 60’s and wanted to be the next Beatles, Mick Jagger, Cher or Cat Stevens.

The truth about any art form is that it is next to bloody impossible to get to the top. You either need to be so brilliantly talented, exceedingly lucky or be in the right place at the right time. In Amanda Hocking’s case, she had the perfect genre for the advent of ebook devices that were first accepted by younger readers. Trying to copy her style now is a complete waste of time. The moment has passed, but Amanda Hocking is and can build upon her popularity created at that precise and maybe fortunate point in time.

Before self-publishing, you took your chances with a literary agent and only a very few manuscripts made it to publication. Of them, only a very few became bestsellers. Now we have the opportunity to self-publish, little has really changed. Yes, you can publish your book and be very proud of that achievement. But there aren’t more readers in the world and they aren’t suddenly spending ten times more on books and you just can’t fit more books in the list of the top 100 bestsellers. The chances of a book selling well are no different. The only difference is that it is readers who are making the decisions now, and not a literary agent.

If your only motivation in writing a book is to make money, I would advise keeping hold of your day job for some time yet.

If you write for the love of the art of writing though, self-publishing is the most wonderful platform ever created.

Writing Has Never Been A Get Rich Scheme

4 thoughts on “Writing Has Never Been A Get Rich Scheme”