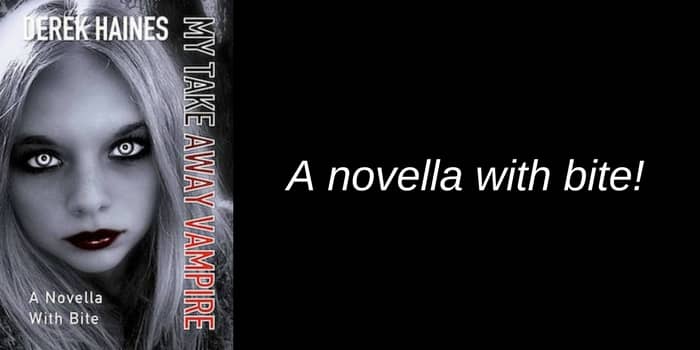 It all started as a little joke.

But then somehow it turned into a little story and then into a novella. So far removed from anything I had ever written before, and during the early drafts, I was advised by those close to me to drop the whole idea immediately. When the last draft was finished the advice changed from dropping the idea to advising me against publishing the crazy story at all. You must be joking was ringing in my ears.

But I am nothing if not stubborn and I continued on with my vampire story. However, in my mind, I hadn’t really written a vampire story. Yes there’s was a vampire in it, but the story for me was about a teenage boy named Reggie. So it wasn’t so different from my previous books. I found a character I liked, got to know, had empathy with and wrote his story. About his relationships with his parents

So it wasn’t so different from my previous books. I found a character I liked, got to know, had empathy with and wrote his story. About his relationships with his parents and peers and trying with great difficulty, to grow up.

So now that it has been published against all advice, I am just over the moon to have recently received the first reviews from a couple of readers who really know their stuff.

A spoof on the vampire craze? A hilarious comedy?

If you read My Take Away Vampire as a comedic vampire spoof, then you will absolutely love Derek Haines novella.

The vampire is Agatha and the comedy comes from Reggie, who is her botched vampire attempt. There is Mr. Fipps, a ghost in the cemetery where Agatha and others sleep for about 300 years. The other characters you simply must have the fun of discovering yourself.

I recommend reading this amusing story especially if you laugh at the zany vampire craze. It’s a quick read and Derek Haines does not disappoint his readers with his appealing writing style. He develops his characters in depth which entice his readers to yearn for more adventures. Such is the case in My Take Away Vampire, but I can’t tell you which character I hope to follow because it will spoil the story.

So check out this entertaining novella and enjoy a good laugh!

Book Review: My Take Away Vampire by Derek Haines

By Emma’s Ramblings on Supernatural Fiction

Forever teenage vampire Agatha’s favourite hunting ground is the brightly-lit interior of McDonald’s. Flashing lots of flesh, she finds easy and willing prey; her preference is male virgins and so she dresses in the manner she thinks will most entice them, i.e. a little teenage tramp. Agatha is not without heart however and always gives them pleasure before she feeds. Hey, I’m sure there are quite a few guys out there who would happily receive oral sex in exchange for their blood. In short, Agatha is brazen.

I finished this story in one sitting; it’s easy to read and very well written but I would have liked to learn more about Agatha and how she survived the past 300 years. Wouldn’t her presence in small town suburbia be noticed? Why did she remain in her hometown of Eatensville, a dump by all accounts? One majorly creepy element was Agatha’s seduction of a 15 year old girl who she describes as a “savage tart”, killing her after sex and leaving her body with her teddy bears. Agatha was 15 years old when she was turned some three centuries years ago so is this meant to make the fake relationship ok? She then seduces a married man who’s married to a “bitch” (Agatha’s word, not mine). He believes her to be no more than 15 or 16 and yet her age doesn’t seem to bother him at all.

This novella is well written, creepy in places and overall funny and entertaining. In a literary world filled with deep, brooding male vampires, Haines’ tale was a welcome change.

The best thing about My Take Away Vampire is that it made me laugh, which is always a good thing.

Smitten By A Vampire

One thought on “Smitten By A Vampire”