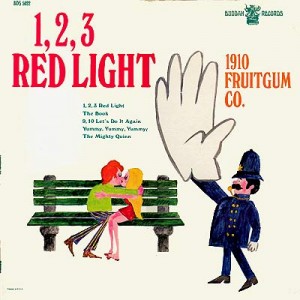 I’ve been wanting to have a post title like this for a very long time, but had in my mind it would have something to do with food. But alas it hasn’t.

The 1910 Fruitgum Company were a pop group in the late sixties that started what became known as bubblegum music. I can’t think how long it has been since I heard their music and to have it just pop up on my TV had me off to do some historical research. I recalled another of their songs, ‘1,2,3 Red Light’, but got a surprise at how many popular hits they had during their heyday.

Can you remember any of these songs?

Pop Goes The Weasel
Keep Your Thoughts On The Bright Side
Simon Says
May I Take A Giant Step (Into Your Heart)
The Mighty Quinn
9, 10, Let’s Do It Again
Goody Goody Gumdrops
Liza
Mr. Cupid
Please Me, Tease Me
(Play Our Song) Mr. Music Man
A, B, C, I Love You
Indian Giver
No Good Annie
I’ve Got To Have Your Love
Good Good Lovin’
Candy
Special Delivery
Game Of Love”
Groovy, Groovy
Sweet Lovin’
1910 Cotton Candy Castle

Not bad for a group that got labelled as a ‘One Hit Wonder’ by many.

As with many groups of the era, there was of course the mandatory reformation in 2007. Minus a couple of members who had passed away. But hopefully they made a few bucks.

However, I much prefer to have my memories of what they were in the sixties. Enjoy!