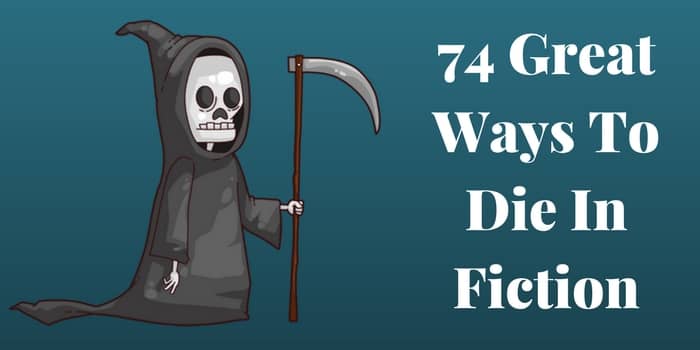 There is nothing like a terrific death in a work of fiction. But 74 great ways is better.

Of course there are always a plethora of shootings and bomb blasts in fiction that bring about the final demise of both the good and bad guys, but thanks to an article I stumbled upon in The Telegraph, I can now share a graphic of the many and varied ways that William Shakespeare artistically killed off his characters.

While mundane stabbing accounts for almost half, I was attracted to being baked in a pie as one means of death that really had appeal. This reminded me immediately of an 80’s movie, Eating Raul, where the long line of deaths in the movie involved a frying pan, and later, a sausage grinder. Food and death. What a great pairing!

The other notable deaths for me are a lack of sleep and dropping dead. One can only wonder how the Bard added any action to these unlikely forms of death scenes. Anyway, here is the graphical display of Shakespeare’s 74 ways to die, which are going to be incorporated into a new play, The Complete Deaths. 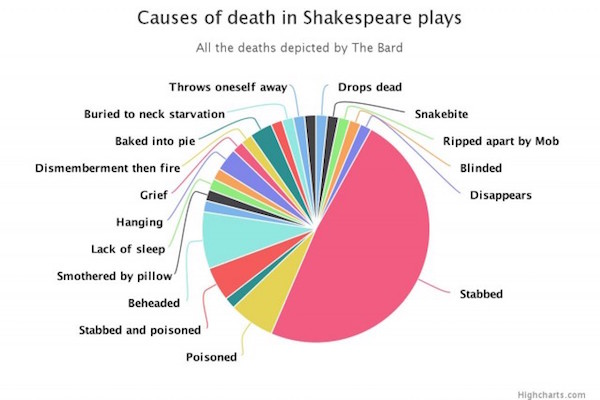 I am a little disappointed that there are no deaths from a slit throat or the guillotine, but beggars can’t be choosers I suppose. At least there are a couple of beheadings, but these were probably by axe. The Bard knew what he was doing though, so this list must be the be all and end all of classic fictional deaths.

However, a couple of Shakespeare’s deaths have me confused. Death by blinding and simply disappearing probably need a lot more explanation. I should read more of the Bard methinks.

6 thoughts on “74 Great Ways To Die In Fiction”