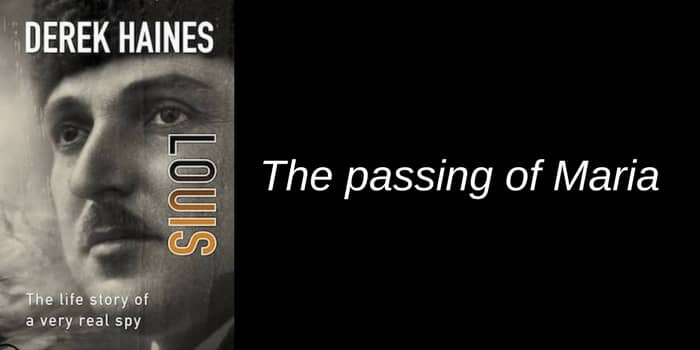 For those who have read my book Louis, you will recall one of the main characters, Medeia.

In reality, she was a wonderful, courageous and charming woman, whose real name was Maria. She was the wife of Louis and her passing at the age of ninety-nine now closes the final chapter on her life and that of Louis.

Louis was a spy and man of many secrets, and to her last day, Maria kept those secrets safe.

Although her role in the book differs slightly to her real life, many aspects were true.

She was born in Greece and met Louis in Africa. While still a mystery as to how she came to Africa, it does appear that she met Louis in Kenya through a mutual friend.

Their life together then became shrouded in mystery until they arrived on Australian shores many years later.

My father was a very close friend of Maria, and I’m sure he knew more than most about Maria’s life. However, as my father passed away some years ago, I will never know what they shared.

Perhaps Maria’s family may know more, or come to discover through Maria’s possessions some of the secrets of Louis and Maria.

But in one way, I hope not. The remarkable lives of these two people have left me with wonderful memories and even more delightful mysteries.

One of my happiest days came when Maria’s niece informed me that due to Maria’s failing sight and understanding in English, she was reading my book Louis aloud, and translating when needed, to Maria.

A little while later, I received a card from Maria thanking me for writing my book about her husband.

That was more than enough for me to know that writing my book had been worthwhile. If it never sells another copy I don’t mind because I was able to share my story with the most important reader in the world. Maria.

The Passing Of Maria

3 thoughts on “The Passing Of Maria”