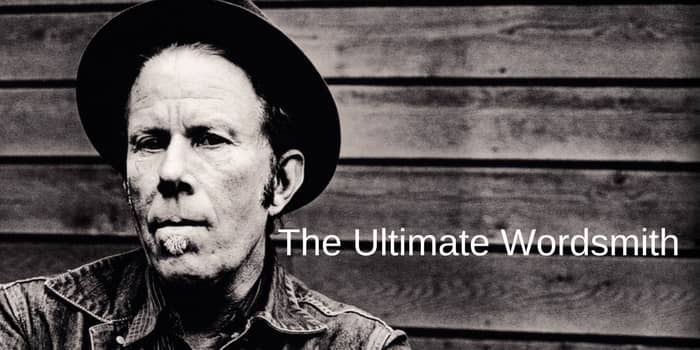 Calling myself The Vandal was a bit of fun many moons ago that probably arose as a result of an excess of cheap red wine. A joke about my bad spelling and a chronic yet imaginative use of the grammatical negative. In such a state, it was easy to think that I had some ability with words. Maybe I do, but I just write stuff.

In such a state, it was easy to think that I had some ability with words. Maybe I do, but maybe I just write stuff.

When it come to a true wordsmith, there is for me no one who stands anywhere close, let alone above, Tom Waits. In my mind, he is a modern day genius without peer. The only shame is that although his music will join the all-time classics, I just wish he had put a lot of his words together in a book. Oh, one can wish. But maybe his brilliance is in his brevity, and we should be satisfied with that.

Oh, one can wish. But maybe his brilliance is in his brevity, and we should be satisfied with that.

Here is just a small sampling of his mastery with words.

“I’d rather have a bottle in front of me than a frontal lobotomy.”

“I don’t have a drinking problem ‘Cept when I can’t get a drink.”

“I was born in the back seat of a Yellow Cab in a hospital loading zone and with the meter still running. I emerged needing a shave and shouted ‘Time Square, and step on it!'”

“It’s colder than a ticket taker’s smile at the Ivar Theatre on a Saturday night.”

“Colder than a well digger’s ass”

“…it seems a stray bullet actually pierced the testicle of a Union soldier and lodged itself in the ovaries of a woman standing approximately 100 ft. away. She’s alright, the baby’s doing fine…of course the soldier’s a little pissed off…”

“…You end up taking advantage of yourself. There ain’t no way around that.”

“Coleen’s belly was shakin’ like jelly And I’m gettin’ harder than Chinese algebra.”

“Oh, I don’t mind going to weddings, just as long as it’s not my own…”

“It walks down to end of the counter (His Veal Cutlet) and beat the shit out of my cup of coffee. I guess the coffee just wasn’t strong enough to defend itself.”

“All the donuts have names that sound like prostitutes”

“Deal out jacks are better on a blanket by the stairs, I’d tell you all my secrets but I’ll lie about my past, So send me off to bed forevermore.”

“The large print giveth, and the small print taketh away”

“Never trust a man in a blue trench coat, never drive a car when you’re dead”

“Small Change got rained on with his own thirty-eight”

If this is your first taste of Tom Waits, you must go on a discovery mission. But one warning. He is highly addictive.