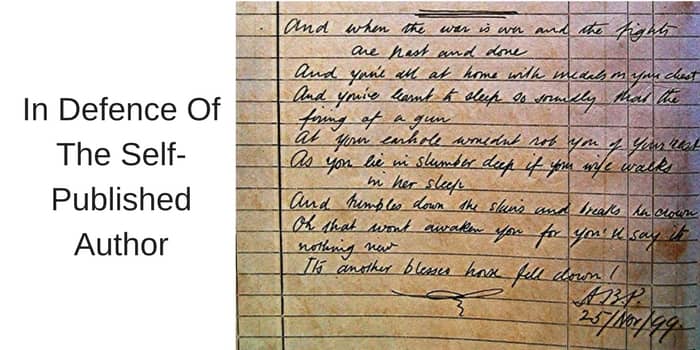 The Self-Published Author and ‘Banjo’

While reading the following poem, which has always been a favourite of mine, I couldn’t help but think of the similarity with the current debate and divide over self-published books compared with traditionally published titles. It has become a bit city and the bush – New York and London against the world one might say. While many are beset on comparing the incorrect use of the Oxford comma in self-published titles, I really think they are missing the whole point.

Self-publishing is about stories, wonderful and never before published stories from the hearts and minds of passionate people. Rugged yes. But a rugged beauty that like Mr Lawson, many just can’t see for looking.

In Defence Of The Bush by A.B. “Banjo” Paterson

So you’re back from up the country, Mister Lawson, where you went,
And you’re cursing all the business in a bitter discontent;
Well, we grieve to disappoint you, and it makes us sad to hear
That it wasn’t cool and shady — and there wasn’t plenty beer,
And the loony bullock snorted when you first came into view;
Well, you know it’s not so often that he sees a swell like you;
And the roads were hot and dusty, and the plains were burnt and brown,
And no doubt you’re better suited drinking lemon-squash in town.

As a boy from the bush myself, I have to admit to being a little tired of the Manhattan ‘city slicker‘ line that sings to an all too very familiar tune. ‘This writer really needs an editor.’ Sure, but hey, where’s even a little mention about the story? Did you notice that at all while you were spotting the incorrect use of the ‘Oxford comma’?

Just as Patterson and Lawson debated in poetry over one hundred years ago, there is beauty in many things, but only if you want to look for it. If you are always wearing blinkers, you’ll never see it though.

Many, if not all of these authors would love to be able to afford the services of a professional editor, cover designer, marketing manager and perhaps even a tea lady. But on earnings of less than $500 per year, the notion is ridiculous unless some New York and London editors have suddenly become philanthropic and are willing to provide their services at an affordable ‘bush’ price.

Yes, it’s easy to criticise and compare the city with the bush, but perhaps it’s time to congratulate every self published author for rekindled the love of reading with their passion for writing and their willingness to accept little financial reward in return. If you can’t see this aspect, then please stay away from reading any self published books in future; particularly when they have been obtained for free, and go back to paying a New York or London publisher to read Jane Austen or Victor Hugo again.

In Defence Of The Self Published Author

22 thoughts on “In Defence Of The Self Published Author”