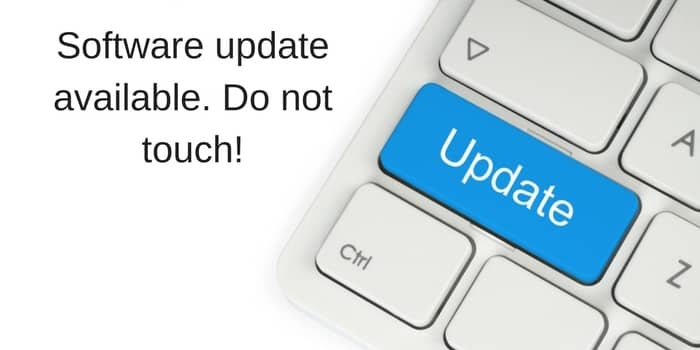 Software update available. Do not touch!!

How often do you have a notification for a software update?

Often I guess. It’s almost a daily occurrence. But my advice, after my last week of pain, is to ignore these dastardly red flashing alerts, once and for all. Well, until there is no choice.

Why? Because unlike the good old days, updates are so often rushed out and are now usually full of bugs, not tested and should be labelled, ‘only for the damned brave’.

It doesn’t matter if the update is for your iPhone, your Android phone, your computer’s operating system, or like for me this week, for WordPress. All I can say, after my last few days of losing a hell of a lot of time, immense frustration, and searching for solutions and ways to get back to where I was, that updating anything is an almost guaranteed way of inviting impending disaster.

The problem is that without exception, updates are pushed out in such a rush, that there is no time for testing. Even Apple, who famously say that ‘it just works’, can no longer keep these bragging rights, as the last few iOS updates have proven that even Apple are happy to release updates that are full of bugs, problems and frustrations, and has adopted the new approach of having early adopters find the problems, which then can take up to weeks to resolve. Sort it out for yourselves, so to speak.

Well, I for one say no. I don’t want to be your beta tester.

So that’s it for me. After this last week of pain, I have vowed that from now on to resist the temptation to click any red button labelled, ‘update‘. I don’t want to be a beta tester.

My advice, when you see an update notification, is to wait and ignore. Tough, I know. But instead of rushing in, go and check the forums first and take a look at the pain and suffering of others. Then you will resist, ignore and, have a nice day.

Albeit, with flashing red icons and warnings all over your devices.

While everything is working just fine, why risk disaster, just to get rid of flashing red icons?

Do NOT update anything, until it breaks!

Software Updates – Ignore And Have A Nice Day

2 thoughts on “Software Updates – Ignore And Have A Nice Day”