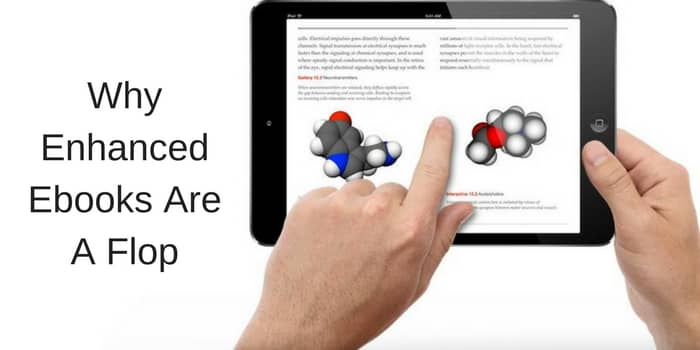 What’s the problem with enhanced ebooks?

From day one of ebooks, there has been the expectation that enhanced ebooks would develop quickly from more than just an electronic text version of a traditional book. Being an electronic data file, an ebook has the possibility to include images, video, audio, interactive maps and any number of other multimedia components that we all take for granted now when we access the Internet or use apps on our smartphones and tablets.

So why do ebooks still look exactly the same as they did when they first hit the market? Why are they still only black and white text, with the very rare photo added, often seemingly as an afterthought?

Apple has had their multimedia iAuthor ebook publishing software and publishing platform available for a long time now, but it is so restricted in both publishing possibilities, and use. Ebooks can only be published on Apple iTunes for use on an Apple device using the Apple iBooks app.

So if enhanced ebooks were ever to be published to be available on all ebook platforms, it would mean creating up to ten or more different versions, which is simply not practical.

The second reason is more subjective. Readers plainly just don’t like or want enhanced ebooks. I read two articles recently about this dislike.

Metabook’s Enhanced E-Books Are An “All Out Assault” On The Senses, And Readers Don’t Want Them

Young Readers Say No Thanks to Enhanced E-Reading

Both make the point that when enhancements are added to an ebook, it is no longer really an ebook, but more like an app, or even an adventure game.

So yes, ebooks have had a lot of potential since their introduction to the reading market to become much more than simply black text on a white background. However, for one of the very rare occasions in modern technology, it seems that no one at all wants an upgraded version of the ebook. It looks like we’re stuck with ebook version 1.0 for a long time yet.

Why Enhanced Ebooks Are A Flop

5 thoughts on “Why Enhanced Ebooks Are A Flop”