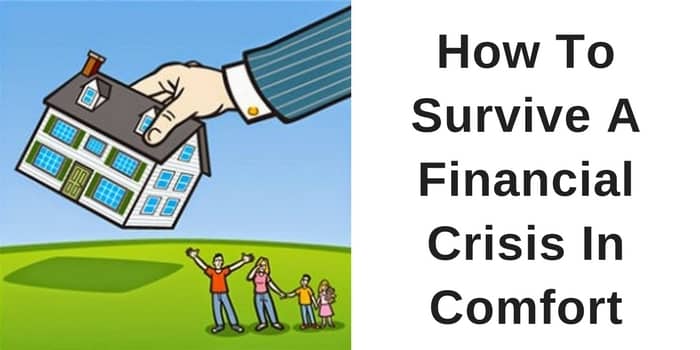 Relax, it’s only another financial crisis

A quick glance at any newspaper will tell you that we are soon going to enter yet another economic or financial crisis. Yes, yet another one.

As always, it will bring on a period of times are tough, things are hard, forget about a welfare card kind of financial crisis bordering on the total economic collapse of the entire Western world as we know it.

That we don’t say or know much about the Eastern, Southern and Northern worlds, and if they will suffer the same financial crisis, tells us a lot about our ignorance, but that’s another story.

However, there’s no use crying in your coffee about the oncoming financial meltdown. Nor is there any worthwhile value in making a big fuss about it. Screaming and yelling might make you feel better for a little while, but in the long run, it won’t help you much at all, and really, you are going to need your energy for far more important matters very soon.

What you need to do is stay calm, become proactive and adapt quickly to the new realities of good old fashioned capitalism operating at its absolute worst.

To help you through the lean times ahead, here are a few helpful hints on how to survive the impending catastrophic collapse of the entire Western World and along with it, the total disintegration of most, if not all, Western democracies.

The very first thing you should do if you can is to get elected into government. It doesn’t matter if it’s local, state or federal. Any government will do just fine. Once entrenched there, you can sit back, relax and do nothing at all for four to five years. Rake in a disgustingly enormous salary along with a bundle of juicy perks and thumb your nose at the poor souls starving in the street. However, if your luck is out and you fail to get elected, move on to the next point immediately.

Enrol in a shoplifting or pickpocketing course. Although these two professions might seem very easy to learn, shoplifting and pickpocketing require very specialised skills, which need to be practised and honed to precision. Once you are adept, though, your chances of surviving starvation will improve significantly.

Economists blame every economic crisis and collapse on a lack of growth. So try to help out a little economically by perhaps, growing a beard, your fingernails, growing some vegetables, or staying in bed with your spouse and growing a new baby. Growing old doesn’t help gross domestic product apparently, but anyway, who expects to be able to grow old on an empty stomach?

You will need to wean yourself off comfortable beds and a mattress, as sleeping in the street usually involves making yourself cosy on cold hard concrete. If you still have a roof over your head, wean yourself off comfy sleeping by starting to sleep on the carpeted bedroom floor for a few nights, before progressing to the cold slate or tiles of the kitchen floor. Then when you’re ready, move to sleeping on the stony cold of your bathroom floor. It might all seem a bit harsh, but you’ll be so thankful that you have prepared your body for sleeping in a cardboard box on the pavement, once the bailiff arrives and kicks you out of your house.

Stop paying all those bills immediately. It is about as useful as installing an ashtray on a motorcycle. You’re going to be destitute soon enough, so why rush into it by giving away your last few dollars to corporations that are probably going to collapse anyway. An economic crisis is usually caused by a lot of people, companies, banks and governments who couldn’t pay what they owed, so how silly have you been?

If you have very young children, start training them now in street begging skills. The younger, the better for this type of work.

Keep Your Chin Up

Don’t get too depressed about the effects of the financial crisis on you and your family. After all, it’s just yet another financial collapse, and as history tells us, they usually only last for about ten years or so. Time will fly by, won’t it?

Hopefully, these few helpful tips will help you, and see you through the doom and gloom of another financial crisis and total economic meltdown. So, off you go and have a happy and safe total economic collapse of the entire Western world as we know it!

How To Survive A Financial Crisis In Total Comfort