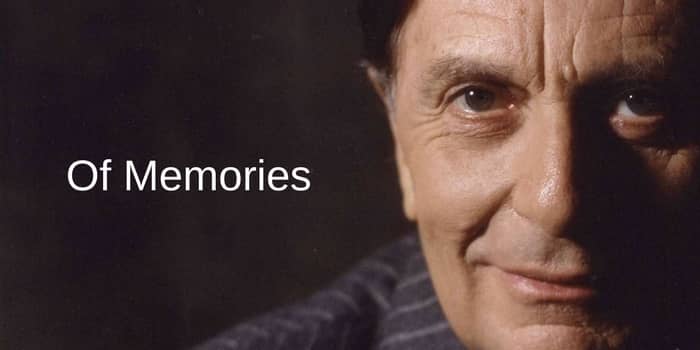 My memory of Barry Humphries

Barry Humphries has always inspired me. Better known to many all around the world as Dame Edna Everidge, it is the other talents of Humphries that I have most admired. Writer, actor and teller of tales. I wrote the following piece based on the style and my memory of a monologue I once heard him deliver in a one-man show many, many moons ago.

A Monologue – Of Memories

As electric toasters go, it was a classic. All Australian mined metal and made by Aussies in blue overalls somewhere near Glebe probably. Weren’t they were the days? When Aussies made stuff for Aussies and played for the local footy team on Saturday. I can only wonder now what ever happened to my Aussie toaster. It was a Breville I think.

Orange seems like a poor description of the colour because after years of faithful service, and prompt and actuate popping, it had taken more of an ochre tinge. Darker at the top of each side due to heat and the embedded residue of burnt toast crumbs. It was still shiny chrome on top, with its two orifices ready for the next two slices, however, the wide black bakelite pusher that lowered the sliced bread did show the wear marks of a long and hard working life.

The clunk-cum-click sound it made when its work was done, sometimes perfectly, sometimes a little overdone, was the wake-up call for my old dog to wearily rise from her prone position and wait. The breakfast ritual always meant a crust or two for her – before she went back to her rest of the morning snooze. Unless I felt the urge for seconds.

The electric cord was of the fashion at that time. A patterned black and white cotton covering, frayed near where it joined the toaster, and at the other end near the plug and was surely likely to catch fire in the event of an electrical short – but in those days we didn’t worry so much about what could happen. We were much more content to just accept what did happen. Even if not a lot actually did.

Its two mouths on top were made for the time when bread was bread and needed slicing with a serrated bread knife, making a little dip at the end of the kitchen table over the years. Wide and welcoming of a thick and roughly cut slice of white bread that had been delivered that morning by the baker. He had Ford if I remember correctly, but the milkman stayed true to tradition as he still had his horse and cart.

One had to be quick to collect the bread in the morning as the little verandah of our house abutted the footpath. If the freshly baked half-loaf stayed in the one gallon can (which was nailed on the verandah post just below the letterbox) for too long, kids passing on their way to school couldn’t resist pulling little out little lumps of fresh bread to supplement their breakfast. By nine o’clock, only the outer crust would be left. At least the noise of them running a stick along the corrugated iron of the verandah stopped by nine as well.

It could well have been a Pye in fact. A company in Victoria if my memory serves me well. They made the best radios my mother always said.

I wish I knew what happened to my toaster. It just seems that it disappeared one day without me even noticing that it had gone. Well, I suppose I’ll just have to accept it and move on. It’s no use wondering and wishing about the past now.

A Monologue – Of Memories

2 thoughts on “A Monologue – Of Memories”