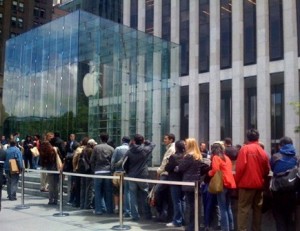 There’s a very good reason why Apple are now about the biggest company in the world and have taken a stranglehold, if not a monopoly in the ‘Have to Have To Be Cool’ market. But who are these millions of Apple freaks who have made Apple what it is today? With the assistance of the bare minimum of extensive research, I think I have been able to narrow down the qualities that define an Apple freak and thus the target market of Apple marketeers.

Take a careful look at this list of ‘must have’ qualities and see if you are a true believer or are you just one of the millions who really don’t give a hoot.

If you failed on any of these qualities, you can breathe easier now. You’re just normal.

Are You An Apple Freak?

14 thoughts on “Are You An Apple Freak?”