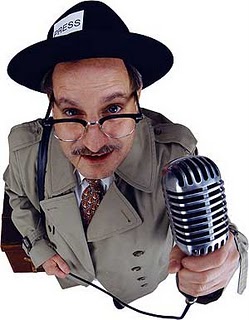 Intrepid Reported Said Orquardly continues his series of interviews with Derek Haines, trying to establish the truth about the writer behind the stories.

SO. It’s a pleasure to catch up with you again.

SO. So, since we last spoke about your book, February The Fifth, you have released another one I believe.

DH. Well, I got bored. It was either a new book, or get a new job. So, I started clacking and poof, out it all came.

SO. But Dead Men, your most recent book, is a radical shift away from say Milo Moon and February Five.

DH. Well, I didn’t want to get labeled as a YA author, so I decided to write a book with some swear words, sexual references and naughty bits. Had to stop at around one hundred and twenty thousand words though, because I was quite enjoying myself.

SO. So can we expect more adult themes in your forthcoming books?

DH. I don’t think so. I really think I used up all my naughty vocabulary, so I’m going back to have some fun on Gloth again. They don’t seem to swear there at all. And I really like Gloth. You know, not much point in discovering a terrific new planet if you don’t exploit it.

SO. So a February The Fifth sequel is underway?

DH. No. It’s a prequel. Two million years earlier than Feb, so unfortunately he probably won’t get much of a mention. But there’s a lot of surfing, beer and Aussie accents in this one. Oh, and some Tudor costumes as well. Might even get in a few Cosmic Cruiser trips and a another feed of Turdling Hurdles as well.

DH. Was that French?

SO. I think so. Does it bother you?

SO. So when can we expect your current book to be released?

DH. I’m hoping to get moving and have it out before lunchtime tomorrow, but that might be a bit optimistic. So, maybe just after.

SO. And the title?

DH. Oh I don’t like giving away secrets at all. But I like to name my books after the main character as you’ve probably gathered from some of my recent books, so I’ll have to ask Hal if it’s ok to mention his name.

DH. What are you on about?

SO. Sorry. So it seems you never stop. What comes next?

DH. I’m actually considering writing a symphony, or learning how to ice skate. Haven’t decided which yet.

SO. Well, good luck, and as always it’s been a pleasure talking to you.

DH. Can I go now? The taxi still has his metre running.

One thought on “Said Orquardly With Derek Haines”