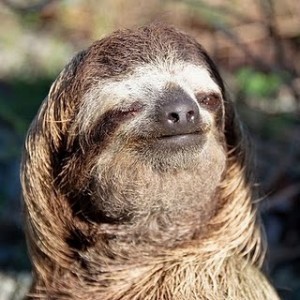 As part of my ongoing mission to bring abject laziness to the front and centre of world debate, I recently introduced to you, and then fully exploited my furry little friend ‘Slug’ the three toed maned sloth in my endeavours to bring attention to my cause.

Following this shallow attempt at attracting attention to my favourite subject, abject laziness, I stumbled on a rather disturbing fact. Slothic laziness is under immediate threat and has been declared officially endangered. I was of course instantly distressed at the advent of this officially sanctioned, yet cleverly hidden Red List fact.

Sloths around the world need to be warned of this travesty, and ensure that the right to abject laziness and other respectable aspects of slothic culture are preserved for our children to slothically enjoy. As much as it hurts me to say, it means that the time has come to do actually something!

Well, it’s time for my mid-week nap now, so if I can leave all the work to you now it would be great. But don’t worry, you can wake me up when you’ve finished saving the world and all that is slothic and good. I’ll still be here. Yawn, yawn, yawn.

2 thoughts on “Abject Laziness Under Threat”