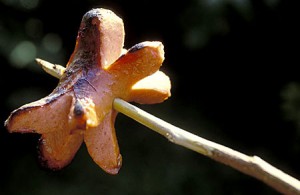 How do you celebrate your country’s birthday? So many traditions, so many countries. So with the numbers against me, I’ll concentrate on one country. Mine. Well, I have two, so I’d better be clear on this and point out that I’m talking about celebrating the 1st August, the National Day of Switzerland. Although I live in Switzerland, I was born in Australia, but oddly enough the major components of each country’s celebration are not that far removed from each other. Fireworks and – sausages!

While in Australia we throw some ‘snags’ (sausages) on the BBQ, here in Switzerland we put on our hiking boots and head off to the forest, find a spot for a fire, and grill our Cervelat. (Sausages again.) So being good little Swiss, we headed off yesterday for the forest and celebrated our country’s 720th birthday in true Swiss style.

After hiking up a hillside for half an hour, replete with backpacks full of cervelas and the rest of the picnic provisions, I was thinking how easy it was in Australia. Just pop out the back door and turn on the gas BBQ. But not so easy going here. Finally after a steep climb, a little descent, another steep climb and yet another descent we found our ‘special’ spot. Near a little creek, a small open clearing and perfect for making a fire.

Now even in summer Switzerland can be a little damp, so the hunt was on for some dry kindling to start the fire. My wife and I were helped immensely by our cocker spaniel who just adored running off with all the best dry sticks but finally we had enough. A little newspaper and a mental note to myself to bring some Zippo fuel next year, we were away. Plenty of smoke and a lot of blowing and finally we had a fire.

Then came the ceremonial part when my wife carefully whittled two green sticks, peeled the cervelat, then with great precision, took her Swiss Army Knife and cut the Swiss ‘cross’ into each end of the cervelat. Then onto the green sticks and over the embers. Twenty minutes later, bliss! Cervelat, bread and mustard.

It was a great afternoon and I just can’t wait for next year – and to remember the Zippo fuel! But here are some memories of today. 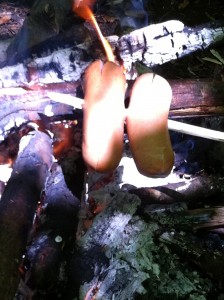 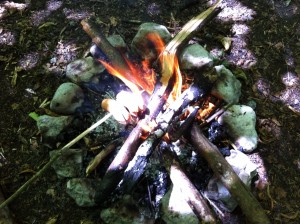