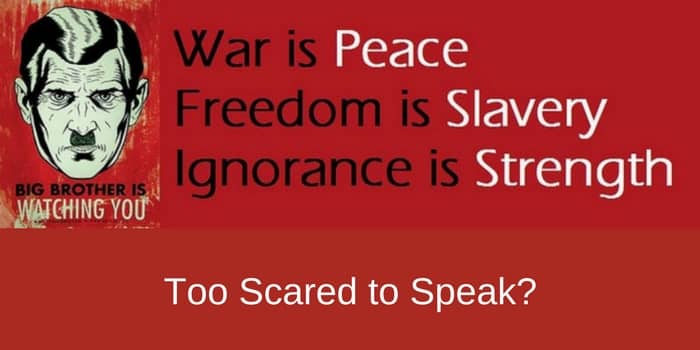 Too Scared to Speak

Not only are you too scared to say what you think, you are too frightened to even comment, like or favourite articles you come across that you earnestly agree with. You have been silenced. Hello, Winston Smith.

Why do I say this? Because I have seen and felt the change in what I read on social media, and how people react, or in fact not react at all to anything that could be classed as, well, topical, or involving something that could be remotely seen as political. Political debate and free speech have not been enhanced by social media; it has been strangled, squashed, killed off and defeated by the threat of being caught by the spooks! People are too scared to speak their mind.

Edward Snowden enlightened us all, but he also warned us that our desire to speak freely is a dangerous occupation, because he proved that what we say online or on our cell phones is monitored, recorded and can be used against us – no matter where you happen to live in the world. The NSA, the US government and all of its clandestine agencies operate with impunity on the Internet, and they can act anywhere in the world.

Of course, they have no right to do this, but they do, so, therefore, the threat is 1984 real. At least one mystery is solved. We, unlike Orwell, know the real identity of Big Brother.

I don’t blame you at all for being fearful and scared to speak, but I would rather not be enslaved by Big Brother, by any name.

I say all this because I read a news item today, which was of course not on the front page of The New York Times. Despite ensuring that all its allies have imposed strict sanctions on Russia, which have been at the cost of countless jobs and enormous damage to the economies of the countries which have obeyed the US demand, the US has kept a convenient loophole up its untrustworthy sleeve that allows it to sell $7.4 billion worth of Boeing aircraft to Russia. So bad luck, from German car maker BMW, down to Nick the Greek olive grower, who have no such loophole. They only suffer, in relative proportion.

While this may not sound frightening, what I found most disturbing was that when I posted this fact on social media, I was met with total silence. Scared to speak and frightened silence I believe, as I am absolutely certain that many found the information hypocritical and absurd. Yet, no one wanted to comment, like, favourite or go anywhere near my posts.

Yet, if I had posted a photo of my bloody dog, I would have been commented and liked to death. What a sad moral state we are in.

Yet, there appears to be many, who are already enslaved, by their silence.

Well, hello Winston Smith, and have a nice day – hiding there beside the bookshelf, too scared to speak.

You Are Too Scared To Speak Your Mind, Aren’t You?

5 thoughts on “You Are Too Scared To Speak Your Mind, Aren’t You?”