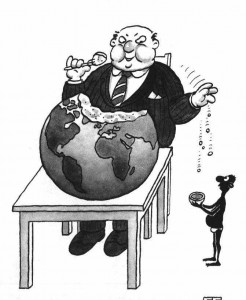 With the economic austerity measures now being inflicted on Greece, is it any wonder people are in the streets getting angry, and unfortunately now violent. When you take away peoples’ jobs, homes, pensions and hope, what the hell do you expect? Even in one of the oldest civilised countries in the world.

The fault once again, as history has repeated so many times, it the ultra rich getting pissed off at losing a little money (that god of all things rational and good) and wanting its money back on their over enthusiastic lending. While Greece had a single Euro ( was it any different under the Drachma?) left in its reserve, there were those who lent, lent, lent until the time came that there was nothing left in the Greek government’s coffers after paying the interest.

This is little different from the money lusting Sub-Prime mortgages that banks of high esteem lowered themselves to in their savagely greedy attempt to extract the last (blood) cent from those who had no (stones) money in the first place. The insane search for profit from those who have no money to start with is just economic insanity beyond belief and typifies the greedy times we are in. Economic and financial insanity gone completely mad.

There are now hints that France could have its AAA rating reduced because of economic concerns by Moody’s. Well, this will really help. Already the mere mention of this (mythical and pie in the sky rating) has had a detrimental effect on France. Send up some smoke, and all the money hungry lenders start seeing fire.

If the trends continue, the selfishness of the money lenders of the world who see nothing except dollar signs and returns on foolhardy investments, we will all be soon living on the streets fighting with rocks and stones.

I’m currently reminded of one of my favourite Douglas Adams quotes:

“This planet has — or rather had — a problem, which was this: most of the people living on it were unhappy for pretty much of the time. Many solutions were suggested for this problem, but most of these were largely concerned with the movements of small green pieces of paper, which is odd because on the whole it wasn’t the small green pieces of paper that were unhappy.” (Adams, “Prologue”, _Hitchhiker’s_, 1).

10 thoughts on “A Greek Tragedy”