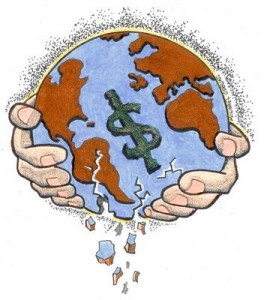 While we all now appreciate the wonder of the Internet and its global reach that connects the world in milliseconds, it’s just a damn shame that the governments of the world have not caught up. Still looking inwardly and only interested in their little patch of turf and of course, taxes. At the same time, international corporations fare little better as they pick and choose their profitable markets around the globe and well, stuff everyone else.

As a self publisher I know how Amazon are very selective in what services and products they offer to only limited parts of the world. They also have price variations that do not simply reflect local taxes. After a bit of searching I found at least 5 different URLs on Amazon pointing to just one of my ebooks. Different prices and different margins. My $2.99 ebook in the US will cost me $3.90 here is Switzerland and £2.21 in the UK. In France and Germany it is Euro 2.99.  In Japan, it won’t even tell me (the publisher) the price. Enough to say that if you live outside the US, you’ll be getting ripped off by at least $1.00, if not more. For what? Amazon usually call it ‘Free International Wireless Transfer.’ I call it theft.

Then there are countries in the world that are blocked by Amazon and are not permitted to even download the Kindle app for their PCs. There goes a few possible sales for me. In fact I get a lot of messages from readers from the Sub-Continent and Asia telling me they have no access to buying my books.

While Amazon allows blogs to be published on Kindle, you’re right out of luck if you are not living in the US. Another no-go zone for non-US customers. Apple fare little better. When I shop for apps or books I’m predominantly offered German versions and am restricted from accessing products in the US or UK stores. Same goes for iTunes. Well, I suppose I should just love buying Swiss Yodels. What a choice. However it would be nice for the other halves of Switzerland who speak French, Italian and English to have a little more choice than yodelling in Swiss German.

There is no doubt that most problems on the Internet are caused by the US government’s self-centred tax policies. Although most of the big Internet companies are US based, this does not mean that they only operate in the US. For other industries, tax is usually calculated in the country of operation. ie: Oil companies and banks. But as has been seen with the Amazon sales tax fiasco in the US, how can tax be charged by the US government on a product manufactured in Portugal, sourced in Spain, warehoused in Ireland and sold in Turkey? However the US government have other ideas about this.

The same problems arise for any form of income that a non-US resident makes from US based Internet companies. Generally, if you are not a US citizen you are penalised. Either by not being able to have your proceeds electronically transferred, or reduced by 30% because of US withholding tax or simply forbidden from using the service at all. Good one Nook!

Then as a buyer of products on the Internet, so many online stores are based in the US and do not offer delivery outside the US. Probably because of the restrictive controls placed upon them by US regulations.

Until the Internet becomes truly global, it will remain a US centric service controlled by the US government, who will of course only look after their own best interests. And stuff everyone else.

The Problem With All Things Internet

13 thoughts on “The Problem With All Things Internet”