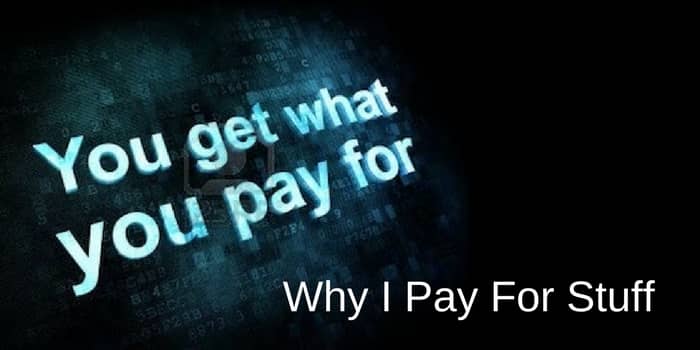 Free is great, but it almost always comes at a cost

Everyone loves a bargain, but free is rarely a great buy. In the last year or so, I have noticed that my small selection of time filling games on my iPhone are now blasting me with ads every two to three minutes. Even worse, one of them blasts out ads with sound even when I set my phone to silent.

Aside from my few games, many of the freebies I use are for my WordPress blogs. Again, however, a lot of these applications and plugins that I have used for years, are either becoming infested with advertising or have had key features removed.

One plugin that I have used for ages changed dramatically recently. To my horror, a recent update had bundles or data tracking code added, without notification. I only discovered what was going on when I noticed my site speed had slowed suddenly and went on a hunt to find out why. Needless to say, I reverted to a previous version immediately to kill off the privacy invasion, and I am now on the hunt for a replacement.

I understand that developers need to make a buck, but hey, so do I as a writer. However, I don’t fill my free ebooks with nasty data tracking scripts or blast my readers with advertising. Perhaps, though, the day will come when this happens to ebooks if online retailers decide to recover the delivery costs of free ebooks via advertising. Or worse, decide to make a profit from free ebooks.

Why I started paying for stuff

When I was setting up a new blog a few years ago, a couple of features I wanted to use were available as free plugins. When I tried them, they worked, but not quite to my liking. I fiddled, coded, found workarounds but still wasn’t happy with the speed or functionality. Finally, after days of work, I checked the price of the premium versions of the two plugins. One was $22.00 and the other $25.00.

Calculating the time I had invested against the prices, I realised that it would be a small price to pay, but only if these two pieces of software worked 100% to my satisfaction. I checked the list of extra features and shot off two emails with my outstanding questions.

Once I had the answers, I was satisfied and bought the two plugins.

I got more than I bargained for!

The two paid plugins worked perfectly, and after trialling many of the settings, I discovered that I could do even more than what I had first planned. I did run into one little problem, though, and couldn’t find the solution in the FAQs, so I sent my question to support, expecting a long wait for a reply.

Wrong! I had a reply in less than 30 minutes, and my problem was solved.

I now have many paid applications on my WordPress sites, and one of the benefits has been that I have got to know a few of the developers. With some, I am now a beta user for new versions so I get access to the latest functionality, and of course, a helping hand if there is a problem with the beta versions.

One of the first developers I met in this way now looks after all my WordPress development work.

The benefits of paying a little really added up.

Free is free, but I much prefer a bargain

Outside of my blogs, I have purchased quite a few tools that I used day in, day out. I couldn’t do without Grammarly now as it saves me so much time when writing, nor could I do without a bundle of over 20 paid apps that I use on iPads for teaching. I also pay for cloud storage, so I never have to worry about backups. I use Apple’s Time Machine, but it breaks so often I can’t rely on it.

When I total up the amount I have spent on all the tools and applications that I use on a daily basis, it comes to peanuts. I spend much more on beer!

I believe I get great value for money, and without being pestered with advertising, or worse, having my data stolen. One other benefit is that I don’t have to worry about unscrupulous suppliers of free software and apps who inject viruses, adware or spyware into their free offerings.

There was a time when we all thought that the Internet was free, but now I would rather spend a few bucks and know that I’m getting what I paid for, and some peace of mind.

Why I Pay For Stuff – Because Free Usually Sucks