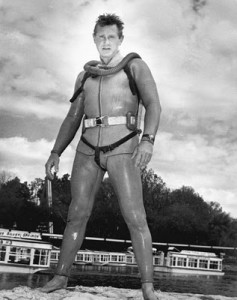 As a follow up to my blog post about childhood memories, I just had to add another image that was burnt into my young brain. Living in a small country town meant I had no television. Except when I went to stay with my grandmother and grandfather in the city. I would sit and look at the test pattern for two hours, just waiting for a program to begin. Then listen intently as it was announced that Channel Seven operated on 107mhz and so on until the nation anthem played and the real television began.

However, the image that is most powerfully etched in my brain is of sitting and waiting for six o’clock in the evening. This was Sea Hunt time. Lloyd Bridges is buried so deep in my brain, I can still hear his voice and recall every type of scuba suit and tank configuration he used. After Lloyd, it was time for the news. I remember looking at the paper in the newsreader’s hands and waiting for the stack to reduce to the last few sheets. Only when he had put the last sheet down, was it time for entertainment to continue. Oh, Lucy. Yes I loved Lucy too!

One thought on “Childhood Imagery”