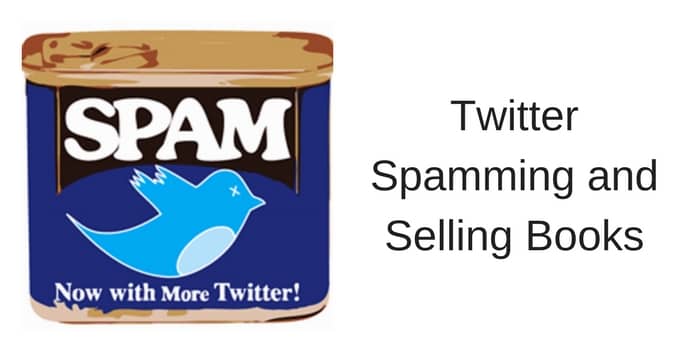 It’s no secret that spamming is a real no-no on social media and totally frowned upon. Then again,

Then again, pop-ups on web pages are an absolute pain in the neck as well, but most marketing gurus say they work exceptionally well. Email campaigns usually end up in 1,000’s of junk email inboxes but they continue to be sent out in the billions every day.

The problem is, that these techniques work when it comes to getting noticed, building an audience, and selling products, no matter how frowned upon they are.

While I don’t use pop-ups or bulk email because I just find them totally obnoxious, I have to admit that on certain social networks and Twitter, in particular, hitting hard and often really does work. Put simply, the more I Tweet my books, the more books I sell. A simple fact.

Perhaps this is because there is first of all, an acceptance on Twitter that users are more likely to be ‘flogging‘ something than on other networks. It could also be because Twitter is so instant that no one notices the previous twenty Tweets that I had sent and only notice the one that they almost accidentally saw on their timeline. This also seems to be true for Google+ and Stumbleupon, which both seem to operate in a similar manner to Twitter. However, on Facebook, I tread very carefully and post promotion rarely. Facebook is for friends and staying friends, even if it’s a Facebook Page.

For whatever reason, though, on Twitter, Google+ and Stumbleupon, I have never had a complaint about the number or frequency of posts I send.

I can imagine that some of you are now ready to run off and check my feed on Twitter to spot my ‘spamming’ activities. Well, hold on a moment. While my main Twitter account does have some promotion, this is not where I do the bulk of my promotion. I have another seven Twitter accounts for that.

Why seven more? Well, each one is targeted at different demographics and potential readers. While my main account has around 36,000 followers, my total following on all my Twitter accounts in nearing 160,000 and rising steadily. By spreading my promotional tweets across these eight accounts, it reduces their frequency and therefore is not seen as repetitive spamming, but as marketing and promotion. Well, that’s my definition anyway.

So is spamming bad? Yes of course it is. But does it work? Well, yes as well. So I’ll let you decide on the right and wrongs of this but in the meantime, I’m off to check my book sales for the day.