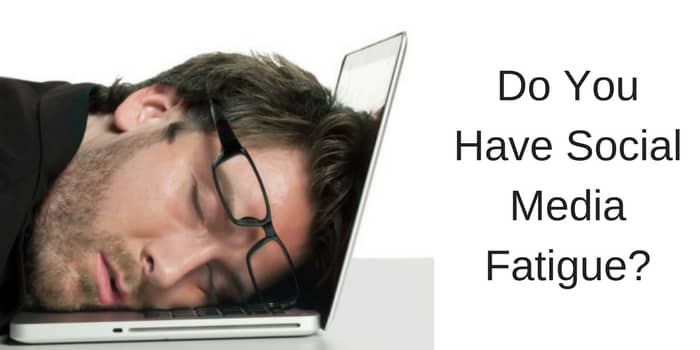 Are you tired of social media?

As an early adopter of social media, I’m now finding it increasingly difficult to decide what I should be doing with it now. In the early days, it was a fun way to communicate and keep in touch with friends and family that I have scattered around the globe. Then, as I’m a ‘wanna be’ author of note, I tried using social media as a way of letting people know that I wrote books.

However, with the sudden advent and popularity of ebooks a couple of years ago, I found myself spending more time letting people know about my books than keeping in contact with my friends. Undoubtedly driven by the hype and all the expert advice I read about using social networking as a platform for ebook promotion, I put my shoulder to the wheel and started putting in the long hours that were necessary to build a broad social media platform. The key factor in doing so, however, was ‘engagement’, which was extremely time-consuming. But I put in the hours and ended up with a decent size network.

Over the course of the last year, though, I have noticed that this fundamental element of ‘engagement’ is rapidly disappearing and being replaced by either blatant advertising and ‘in your face’ pushy marketing, or habitual posting of the inane and thoroughly boring, as users try to keep their timelines active.

On my two most used platforms, Facebook and Twitter, there is now such a banal sameness about what is being posted that I am struggling to stay enthusiastic. Facebook has become a stream of silly little images with stupid sayings, pictures of cakes and worst of all, streams of online game results.

Twitter, on the other hand, is now where I am bombarded with ‘buy this and that’ every twenty seconds. It has become so bad that when I follow a few new users, I’m guaranteed to receive a bunch of automated Direct Messages ‘welcoming’ me by telling me to buy something. Hardly what I’d call fun or engagement.

So has social media lost its way and just become a huge space where people just try to sell their wares? Or use it as an enormous public toilet wall where one can scribble any inane nonsense?

To be honest, I’m getting tired of both uses.

With engagement disappearing and automation becoming the norm, the decision that is perplexing me is how I will use social media from now on. Or should I bother continuing to use it at all?