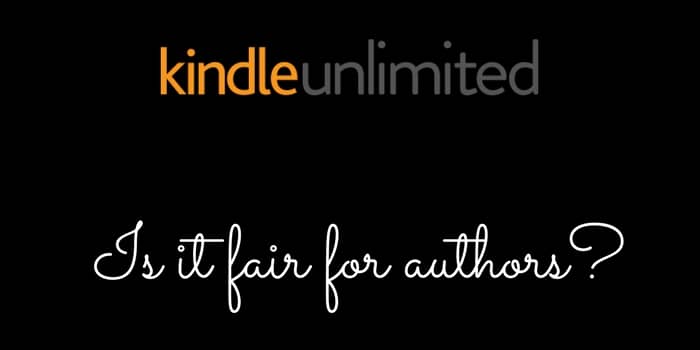 A Kindle author enrolled in Amazon’s KDP Select is an unfair lottery.

The Kindle author lottery being of course, the size of the monthly pool of money allocated by Amazon to Select Kindle authors, and which rules Amazon will decide to change or modify, AFTER an author has signed away their rights to sell their ebooks anywhere else other than Amazon, under Amazon’s KDP Select (KDPS) exclusivity clause.

Sign here to grant Amazon total exclusivity and all will be wonderful. Yeah, sure.

Six months ago, I decided to enrol all my ebooks in KDP Select once again. Having done this twice before over the last four years, I knew the ropes, drawbacks and pitfalls of KDPS of course, and had told myself I would never do it again, as it went against my Indie Author beliefs. But my decision, this time, was based on the introduction of Kindle Unlimited. In my mind, as ebook subscriptions were going to be part of the future so far as ebooks were concerned, I believed I had to try it out, and not simply be an onlooker, Indie author or not.

I was quite pleased after my first month or two. Although my ebook borrows only returned between $1.35 -$1.45, as against my sales prices of between $3.99 and $4.99, there were plenty of borrows, which didn’t seem to adversely affect my normal ebook sales. On balance, it increased my monthly income, so I was quite pleased.

However, towards the end of my third month, Amazon changed the rules radically for Kindle Unlimited. The introduction of Kindle Edition Normalized Pages (KENP) Read, was not a minor adjustment, but a massive change in the way I was going to be paid for ebooks borrowed under Kindle Unlimited. I could have withdrawn my ebooks at that point, but as there was so little information available, apart from a lot of conjecture, as these few articles in The Telegraph, and Melville House along with Whatever indicated at the time (KENP) was introduced, but I didn’t.

I decided to stay in KDPS for three more months. Again, I had to try it before I could make an informed decision.

After my second three month period, I have now made my informed decision. I don’t like KENP, or ‘paying for one bite of a hamburger‘, at all. It is wrong. I can handle a reduced return for per unit ebook borrows, but not a system that reduces a book to payment by words read. My books are books, stories, and were written to be bought or borrowed, and then read as such. Payment by words read destroys the essence of what a book is. It makes me feel as if there should be a ticking metre at the bottom of each page of a Kindle KU ebook, telling readers that they have consumed $0.00514 worth of the ebook they are reading. Perhaps also, a notice stating that Amazon is monitoring every single word a Kindle owner is reading. KENP is unfair on both reader and author.

So, today I have un-clicked the KDP Select exclusivity boxes on all my ebooks, which means they will no longer be enrolled in KDPS after their expiry dates arrive over the coming few weeks.

So why don’t I want to be a KDP Select Kindle author, again?

From my experience with KDP Select, there are four reasons not to grant exclusivity to Amazon.

One: Amazon changes the rules far too often. Granting ebook exclusivity to Amazon is a big decision, yet Amazon treats you like a guinea pig once enrolled. KDP Select is a testing ground, and a marketing tool for Amazon, which it uses, changes and modifies with no respect for each Kindle author, who have honoured their side of the contact. For me, KENP was a change too far from what I had agreed to when I granted Amazon exclusivity.

Two: Amazon KDP Select greets you with friendly algorithms. Each of the three times I have enrolled in KDP Select, I have had an immediate, substantial and dramatic increase in ebook sales. On each occasion, this has lasted for about four months, and then sales gradually wane and return to what they were before I enrolled. If it had happened only once, I could put it down to good luck. But three times tells me that when you enrol in KDPS, you are placed into a friendly algorithm for a short period so that your ebooks are promoted quite heavily. Then you get dropped. As Mark Coker explained it to me, ‘it’s the heroin effect’. A good analogy, as I believe Amazon use these helpful algorithms to get you hooked on KDPS.

Three: Amazon decides on the monthly pot. Each month, Amazon announces the amount of money that will be allocated for the next monthly KDP Select pool. This amount changes from one month to the next, but in the end, it is simple division. X amount of money divided amongst X amount of KDPS Kindle authors. This controls Amazon expenses very nicely but does little for authors, other than restricting their earnings. For a Kindle author, you have no idea how much you will earn each month for each unit borrow, until Amazon divides the pot and releases the results 15 days after the end of the month. Then there is transparency, which Amazon almost famously are not into at all. How do we know how the pot was divided up, and how was it all allocated? Was it all allocated? Who knows, except Amazon.

Four: I don’t like lotteries. If I wanted to gamble, I would buy a lottery ticket. Entering into an exclusivity agreement with Amazon to enrol in KDPS is a big demand of a Kindle author, but worse is that you have no idea how your exclusivity will be exploited, modified or managed by Amazon. That is not a fair contract. It is a lottery.

After being a KDP Select Kindle author?

Over the next few weeks, most of my ebooks will be returning to other online retailers, including Apple, B&N, Kobo, Google Play and Smashwords and their aggregated channels. My ebooks will remain for sale on Amazon, but most of them non-exclusively, so they will not be available via Kindle Unlimited. My experiment with Kindle Unlimited has well and truly finished. But why did I say, most?

Well, one thing I learned from my experiment was that a few of my ebooks do very well in Kindle Unlimited as opposed to unit sales. They are titles that seemingly appeal to KU subscribers, such as first books in a series or stories with a hint of romance. Also, by keeping a few books in KDPS, I can still do a little Kindle promotion. I might be wholeheartedly Indie, but I’m not silly. Kindle is the biggest seller of ebooks by far, so it makes sense for me to keep promoting myself there, even given my distaste for KENP.

But my finger will still be hovering over the exclusivity tick box every 90 days for these few ebooks.

5 thoughts on “Kindle Author in KDP Select or Indie Author?”