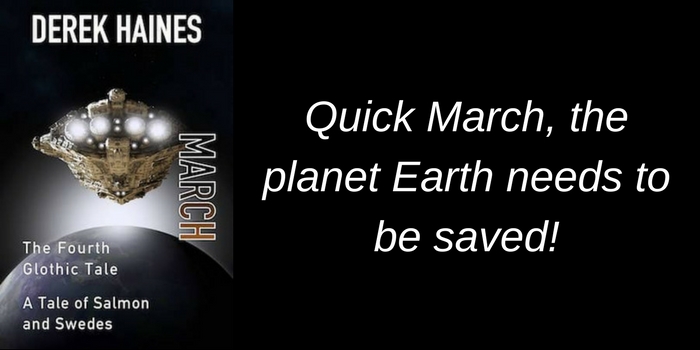 Quick March, the planet Earth needs to be saved!

Not from alien attack, nuclear destruction or even being hit by a misguided comet. No, Earth needs to be saved from making millions of years of painful losses for Gloth, and it falls to March Gregorian, eldest son and heir to February the Twenty-Ninth, the Supreme Potentate of the Twelve Sun Systems of Gloth to find a way to finally make Earth profitable.

The obvious starting point in such a difficult assignment is of course to do some quick research and then ascertain the most lucrative tradable commodity a planet has to offer. Once that is clear, simply arrange to export whole lot more of it and the problem is solved.

As March prepares to make his first journey to Earth, he is sure he knows which Earth product will solve the problem.

Unfortunately for March, all does not go well on the Salmon front, and he discovers all too quickly that Earth is not an easy place to manage, understand, or to squeeze a profit from.

In danger of losing face with his father by returning to Gloth empty handed, March fears that his salmon failure may lead to serious doubts about his ability to remain heir to the Supreme Potentate.

Luckily however, his fears of losing his right to the throne evaporate in a flash when he stumbles upon a remarkable alternative solution.

I had always planned to write three books about Gloth, and after writing February, Hal and Septimity, I was satisfied and pleased that I had reached the very end of my near three year-long Glothic Tales Trilogy project.

However, in the two years since I finished the last book, Septimity, in which the infamous planet, Erde, successfully destroyed itself, there has been a question and an inkling of an idea burning away in my mind. ‘Right, ok, so then what happened?’

I resisted the temptation for quite some time, but finally I had no choice other than to write a fourth book in the trilogy. My biggest problem though was in deciding whether to rename what would become a four-book trilogy by its correct name, a tetralogy. As it is such an unusual and rarely used word, I decided in the end to simply ignore all the mathematics and keep calling my Gloth Tales series a trilogy. I mean, readers are reading and not counting, are they?

So with that problem solved, I moved to my next dilemma, which was to decide on a new main character. This was easy, as since February the Fifth, I hadn’t used another month of the year. I chose March because my daughter’s birthday is on the first of March. This clever decision also opens the way for me to write more Glothic Tales, as I have ten months of the year left to choose from.

The Glothic Tales may one day break the world record for being the most numerous trilogy of all time. I hope you enjoy reading March, and see you again in another month perhaps.