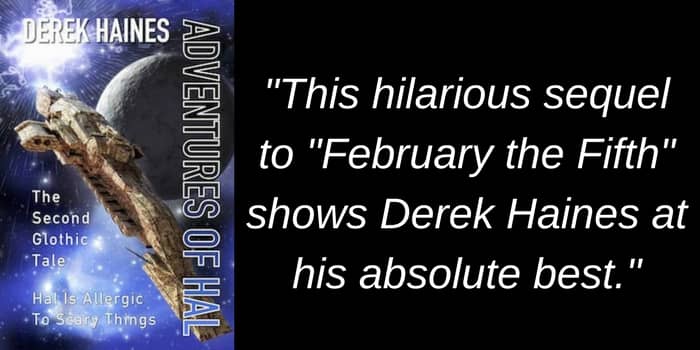 One thing I rarely do here on The Vandal is mention my books. Guilty as charged, so today I will right this wrong and introduce you to one of my favourite characters. Halbert Hoop, or better known as HAL. So without further ado here’s a taste of HAL!

The Adventures of Hal

Halbert Hoop, better known as Hal to his friends, was a lost member of the British peerage. His father, Baron Spencer Hoop, who’d unfortunately come to his demise a few months earlier when he fell from his polo pony and was struck in the right temple by the hoof of his own pony, and simultaneously by the mallet of an opponent who miraculously scored the winning goal with a fortunate ricochet off poor Spencer Hoop’s dying left cheek bone, had disowned his son many moons before his death. His son Halbert had disappointed him greatly by firstly being expelled from Eton for reasons that included beer drinking, habitual smoking, truancy, abuse of fireworks in the school chapel and for causing wilful damage to a number of tutors’ private property. This involved the addition of sugar to the petrol tanks of some tutors’ cars, while others were fitted with potatoes in the exhaust pipe. Both means produced extensive damage to the inner workings of the vehicles in question. His second misdemeanour was associating himself with a group of London punks who regularly arrived at Hoop Manor and proceeded to swear an awful lot and spray graffiti all over the hallowed walls. The final straw came when Halbert insisted on the West Wing of Hoop Manor being converted into a squat for homeless Rastafarians.

Halbert wasn’t a bad young lad at all. He just liked a little fun but got a bit boisterous at times. Probably something to do with his jovial nature, large frame, clumsy nature and a passion for rugby, rugby songs and beer. In fact, he didn’t particularly like the punks, Rastafarians or his other ‘edge of society’ acquaintances. It was just that they did such a great job of annoying his father. Although born into the peerage, Halbert hated the restrictive nature of his upbringing and in particular the snooty class system that he was a part of. Halbert just wanted to be Hal. It was probably the Bert part of his name that he disliked his father the most for giving him.

However and finally, as Halbert had reached the age of eighteen, Spencer Hoop decided that he could take no more of his son’s behaviour and propensity to accidentally break things, and arranged for his son to be formally disowned by the Hoop family. His mother, Baroness Hilda Hoop, was extremely disappointed by her husband’s decision as she was rather hoping that young Halbert would grow out of his rebellious ways, and settle down to study law, and then go on to become a QC MP like many of her luncheon friends’ sons had become. Her only other child, Halbert’s younger sister Matilda, was now her only hope. But she knew that a woman could never acquire the QC MP title. She could only hope she learned to do needlework and marry well.

Halbert was therefore invited to leave Hoop Manor, but would be supported by an allowance until his twenty-fifth birthday. His father had presented him with the necessary papers, bank account details and a one-way ticket to Sydney, as he shook his son’s hand for the last time and then promptly closed the door before Halbert had time to get into the taxi that was waiting for him. A few tears escaped from Hilda’s left eye as her son disappeared through the door to be banished forever. Matilda took it as her cue to ask her mother when she could move in to Hal’s room because it was bigger and had an Internet connection. Spencer Hoop just mumbled something about hoping his son was swallowed by a shark. It seemed he wanted his son to obediently disappear from existence.

Hal looked out from the taxi as it headed towards the long driveway to the road. He smiled at the remnants of graffiti that were still just visible on the walls of the manor. He also satisfied himself by making a rather nasty gesture with the middle finger of his right hand towards his now ex-family home.

‘Are you a Man’ United supporter then?’ the taxi drive asked with a smirk.
‘No way. Arsenal.’
‘So where to?’
‘Selfridges in Oxford Street. I wanna buy some Billabong t-shirts and board shorts!’
‘Going swimming?’
‘Yep. Going to Australia.’
‘Ah. My niece lives in Brisbane. Maybe you could look ‘er up sometime.’
‘I’m going to Sydney.’
‘Well, it can’t be far. I’ll give you her address.’
‘Ok,’ Hal agreed to keep his taxi driver happy.’
‘Her name’s Narelle, about your age, maybe a bit older. Her dad’s a policeman I think. She’s my wife’s sister’s kid so only met once when she was about five.’
‘Nice name.’

Hal gripped his door handle just a little bit tighter as the taxi driver started to write out Narelle’s address while steering the taxi with his knees. The sound of the right wing mirror skimming the hedge by the side of the narrow country lane didn’t seem to affect the driver’s concentration as he tried to remember how to spell Narelle’s surname, but it did cause Hal to nervously sneeze. An unfortunate affliction he had suffered since he was a child. Although a number of doctors were consulted, no remedy was found unfortunately. However one diagnosed an allergy to dust, while two others believed it to be a type of nervous tic brought on by stress or insecurity.

‘Berkowski,’ he said slowly. ‘Just can’t remember if it’s B E R or B I R. Maybe B U R. Anyway, I’m sure you’ll find a phone book when you get there.’
‘Yes, thanks,’ Hal replied as the driver swivelled in his seat and passed a piece of paper with Narelle’s address. The left wing mirror now skimming the hedge on the other side of the lane. Hal’s grip on his door handle firmed a little more at the sight of a delivery van approaching, and wondering if the swivelled taxi driver had noticed the oncoming of impending doom. As the driver turned his body back towards a face forward driving position, Hal thought it a prudent idea to close his eyes. He did, then sneezed again. When he opened them a few seconds later, the road ahead was clear.
‘Where’d the van go?’ he asked.
“What van?’ the driver replied.

Finally arriving in Oxford Street, the driver asked Hal if he would like him to wait. Hal thanked the driver politely for the offer, but said he planned to be shopping for some hours. He was just very happy still to be alive, after having endured the taxi driver from hell for over an hour. As he paid the driver, he tried to will his hands to stop shaking. He was partially successful, but after he had alighted the taxi, and it pulled away into the traffic, he had a relapse. His right hand shaking so much, it dropped his small suitcase to the ground. He tried then with his left hand, which had a little more success. He cursed that it was still too early for the pubs to be open. A drink would’ve been just what he needed. After a couple of deep breaths, he instead readied himself for some beachwear shopping. By the time he finished his shopping, he hoped that the pubs would be open.

With his small suitcase in one hand, three Selfridges bags in the other, and a half smoked cigarette hanging from the left hand corner of his mouth, Hal waited at the entrance of the Slug and Lettuce Pub. The fifteen minutes he waited seemed like an eternity to his arms, but finally he got to quench his thirst, then sip slowly and consider his future while he looked at his refection in the mirrored glass shelves behind the bar. He recalled how his father had often called him the ‘Green Eyed Devil’, which was a quote from a James Clavell novel about a character named Dirk Struan. He knew his father had meant it in a derogatory way, but Hal imagined how his appearance resembled Struan. Red hair, green eyes and a sharp nose. His hair probably much longer and curlier than Struan would’ve had, but he could imagine himself as a buccaneer. He then wondered if Dirk Struan had played rugby, what position would he’ve played? Probably number eight like Hal. You needed to be tall, solid, strong and athletic to play at number eight. Hal looked again at his reflection, and recalled how Dirk Struan in the book Tai-Pan had set sail for the Far East. It was Hal’s turn now. His only real concern was whether his fair skin would tan or burn on the sun drenched beaches of Australia.

‘Another one, Laddy?’
‘Yes please,’ Hal replied as he accidentally knocked over his empty glass as he sneezed.
‘Lucky it was empty, Laddy.’
‘I’m a bit nervous, sorry.’
After checking the time, Hal decided to have a pub lunch before heading to Heathrow for his flight − and his new life.

The Adventures of Hal by Derek Haines