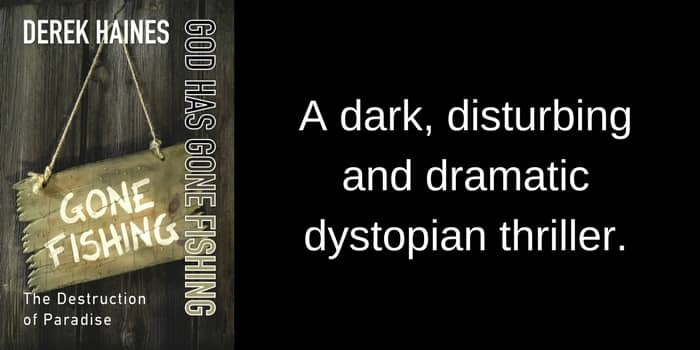 After a year in the writing, God Has Gone Fishing is finally, out of my control.

Yes, I have a new release and it’s a little different from my previous books. Firstly, it’s written in US English, which was a bigger challenge than I imagined and secondly, it is mildly dystopian, which is also a first.

Of course, with any new book, I have no idea how it will be received by readers, but that’s the luck of the game in writing and publishing. All I can do is wait and see.

So what’s the story about?

Empires rise, yet only by sowing the seeds for their downfall

The Economic Apocalypse arrives with biting venom, rapidly turning paradise into hell for those who are unfortunate enough not to be among the very few, who selfishly enrich themselves by profiting from the misery of others. It signals the beginning of the end for an empire built on greed, and for the new poor, they are sentenced to suffer the consequences.

Nathan Smith and his father, endure long, hard and tough times in a small forgotten outer suburb – yet Nathan refuses to bow to the will of the wave of evil that spreads across the country.

Instead, he thumbs his nose at the new dictatorial regime, defying their cameras and surveillance, as well as their black-suited thugs.

He taunts the government brutes; even inviting an occasional beating, because by doing so he can lay claim to small personal victories – and the opportunity to supply the thugs with what they desperately want. Drugs.

When money becomes worthless, Nathan learns to play both sides, and to trade in booze, cigarettes and drugs to survive – and to keep the thugs at bay. With the help of an unlikely ally, Nathan becomes a small-time stock keeper of all that is valuable, and tradable. Yet with his new venture comes risks and dangers that he fails to fully understand.

While life after the apocalypse is tough, unjust and sometimes even brutal, Nathan never bows his head to anyone and refuses to give in to the surveillance, intimidation and threats.

Until that is, he is suddenly implicated in the murder of a government agent, which puts a very hasty end, not only to his thriving business operation – but also to his long, yet awkward relationship with Julia, as he is forced on the run, with danger lurking at every turn.

His only hope of survival rests with the Rider, but is he friend, or foe?

God Has Gone Fishing – The Destruction of Paradise

2 thoughts on “God Has Gone Fishing – The Destruction of Paradise”