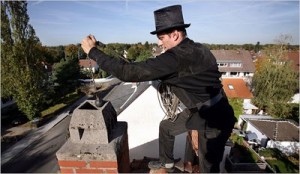 While many are particularly fussy about the company they keep, it is a little more difficult to be choosy when it comes to neighbours. Of course a doctor, lawyer or celebrity would be quite a stroke of luck for those who would think these ideal neighbours. For others it may well be someone with a large boat, a big swimming pool and a few spare Ferraris, while other people may see a qualified motor mechanic or plumber as ideal. Someone from whom you could reap a few friendship fringe benefits.

In my case however, I must be one of the luckiest people in the whole world when it comes to my neighbour. When it comes to omens of good luck in many parts of the UK and Europe, little is as lucky as a chimney sweep or ramoneur as they are called here in French.

The legends and superstitions behind chimney sweeps are very old and in parts of Great Britain it is considered lucky for a bride to see a chimney sweep on her wedding day. In fact sweeps hire themselves out for weddings. It is also considered good luck to shake hands with a chimney sweep or to be blown a kiss by one. Where I live, people will always touch a sweep when they see one. Just for luck. In Croatia it is good luck to rub one of your buttons if you pass one in the street. And in Germany, small ornamental sweeps are given as New Year gifts.

So is my neighbour a real chimney sweep. Of course he is. Complete in his traditional uniform of an all black suit with golden jacket buttons and of course a black top-hat.

One thought on “Good Luck Lives Quite Close”