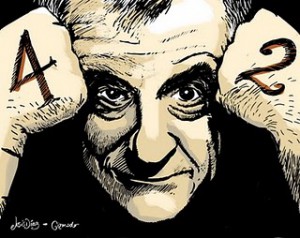 We all know that the number 42 is made famous in the novel The Hitchhiker’s Guide to the Galaxy by Douglas Adams. The Answer to the Ultimate Question of Life, the Universe, and Everything is calculated by an enormous supercomputer over a period of 7.5 million years to be 42.

But just how famous is this oddly even little number? I thought I would investigate.

Examples of Carroll’s use of 42:

# Alice’s Adventures in Wonderland has 42 illustrations.

# Rule Forty-two in Alice’s Adventures in Wonderland (“All persons more than a mile high to leave the court”.)

# Rule 42 of the Code in the preface to The Hunting of the Snark (“No one shall speak to the Man at the Helm.”)

# In “fit the first” of The Hunting of the Snark the Baker had “forty-two boxes, all carefully packed, With his name painted clearly on each”.

# Alice’s recital of her “four times table” while falling down the rabbit hole makes sense if the first calculation is made in base 18, the second in base 21, and so on, increasing the base by three each time. Continuing on this pattern 4 × 12 would equal 19 in base 39, but 4 × 13 calculated in base 42, rather than providing the expected 20 would yield 1A. Hence, as Alice cries, “I shall never get to twenty at that rate!”

# The Red Queen announces her age as “one hundred and one, five years and a day”, which – if the best possible date is assumed for the action of Through the Looking-Glass – gives a total of 37,044 days. With the further (textually unjustified) assumption that both Queens were born on the same day their combined age becomes 74,088 days, which is 42 x 42 x 42. Some commentators have asserted that this is deliberate on Carroll’s part.

Then again, perhaps the number 42, is just so common it just pops up everywhere.

# In William Shakespeare’s Romeo and Juliet, Friar Lawrence gives Juliet a potion that allows for her to be in a death-like coma for “two and forty hours.”

# Fox Mulder, one of the main characters in The X-Files lived in Apartment 42 at 2630 Hegal Place, Alexandria, Virginia.

# The Kumars at No. 42 television series.

# 42 is an episode of Doctor Who, set in real time lasting approximately 42 minutes.

# In the Doctor Who episode Voyage of the Damned, the Tenth Doctor attempts to control a rogue host robot by randomly shouting numbers, including of course, 42.

# In Monty Python’s film And Now for Something Completely Different, the famous “How Not to be Seen” sketch is presented as “H.M. Government Public Service film No. 42”.

# In A Clockwork Orange Alex browses through records in a record store and we see a record of the, at this time fictional, band Level 42.

# In an episode of “Stargate Atlantis” it is revealed that Rodney Mckay’s password is made up of the birth years of several notable minds throughout history, and ends with the number 42. The character John Sheppard reveals that the number is the ultimate answer to life, the universe and everything, to the confusion of his alien companion.

# In an episode of “Stargate Atlantis,” Season 4 – Doppelganger; Dr. McKay asks Lt. Col. Sheppard “Look, do you have any idea how many Gate addresses there are in the Ancient database that have no accompanying description?” to which Sheppard answers “forty two”.

# There are 42 land locked countries in the world.

# The number of laws of cricket.

And lastly and of enormous significance is that my very own address is ……. Drum roll please ….. 42!