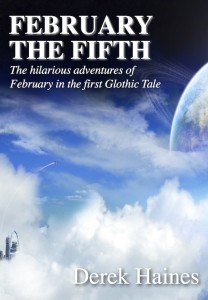 A long time ago in a galaxy far, far away … no, that’s a whole ‘nuther movie. This book takes place in the future. In a place that has no less than 12 sun systems. Twelve, as in the number of months in the calendar. Aha! The rulers of this empire comprised of the 12 sun systems are a Gregorian clan with names taken from said same calendar. Got that? :)

In other words, February the Fifth is a person. In fact, February is the person who ends up becoming successor as the new “Supreme Potentate,” aka, leader of the empire after his father dies (or is he killed?) even though he is an ill-prepared, acne-plagued and fairly lazy, well, fool. The news of his dad’s and brothers’ deaths are delivered by a dour messenger with the most peculiar name of Snurd Humped. (More on him later.)

So, anyway, February goes to his lovely sisters — April, May and June (what else?) — for assistance. Lord knows, he can use it. Despite all indications to the contrary, Feb (for short) manages to rise to the occasion and take the oath properly. Through contact with a special orb, Feb is infused with leadership qualities. Hello? Things have changed.

Then things get really interesting when someone tries to, um, terminate Feb with extreme prejudice. (Yeah, another movie. I know, I know …)

In fact, Feb and the sisters have to take it on the run. They bring along a couple of allies, including a fellow named Stringley, who’s handy at tea making and backgammon, and the aforesaid dour messenger Snurd, whose lost his taste for his former bureaucratic post, I suppose.

Now … what follows gets REALLY exciting. Big spaceships piloted by lizardlike creatures. But nice ones! Explosions as they’re attacked. By their own people! Good grief! Running and hiding. Trips to strange new planets. Historical recountings. Understanding the family’s roots.

To say too much here would reveal spoilers. Let’s just say that the Catholic Church and the planet Earth are both key to the plot. Thus, Douglas Adams meets Dan Brown … sorta. Except without albinos, the Louvre or the number 42. So, it’s different. Really.

Okay, so … a few peccadilloes. Do I wish some double skips had been inserted between a few scenes, here and there? Sure. Could a few words have been sacrificed to editing? Sure. Did I read the book, anyway? Yes, absolutely! Why? Because I really loved it. The story grabbed me right away. It’s a lighthearted, funny read with a serious point. A great combination.

And I laughed out loud many a time. But I’m a kid at heart, so I do that sort of thing.

Er, is it really a spoiler to say it ends well? I don’t think so. To be more accurate, I’d say it pretty much does.

Posted by Debbi Mack on The Book Grrl
http://thebookgrrl.blogspot.com/2011/03/february-fifth-doug-adams-meets-dan.html

Available from Amazon and most online retailers.