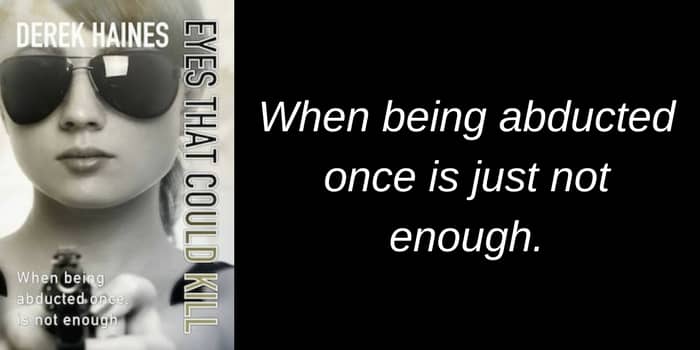 Eyes That Could Kill

When being abducted once is just not enough.

Langley Garret’s Sunday morning started very badly, after waking with a hangover and a depressed feeling of worthlessness, along with a foreboding sensation in his gut.

With his wife working away yet again, and the realisation that their marriage was probably very close to an end, and that his life was slowly ebbing away, he pondered his misfortune.

As he decided to start accepting that his life just couldn’t get any worse, over his breakfast of coffee, cold pizza and orange juice, it did, when his miserable, quiet and lonely Sunday morning was interrupted by two very nasty people, who had orders to abduct him.

Within hours of being captured, drugged, questioned and restrained, he found himself dumped onto a small remote island, with no idea at all why he was taken bodily from his apartment on a tranquil Sunday morning, or why he was sitting alone on a rock, with only his small suitcase and a pleasant view of the sunrise across the water for company.

As with all mysteries, it took some time for Langley to learn why he was abducted, but before he had time to start digesting that limited knowledge, his second abduction a few days later had him totally confused, and all at sea.

Read about Langley Garret’s abductions, mysterious misfortunes, Greek mythology, gods, deities and eternal secrets – and why history can only ever repeat, in Eyes That Could Kill, a mystery thriller.

Reviews of Eyes That Could Kill

A reader may choose Eyes That Could Kill because they enjoy reading mysteries about ancient Greek and its mythology, maybe even Latin mythology, but even if that isn’t the case, Chapter One will hook any reader immediately. It is one of the most intriguing first chapters I’ve ever read.

The main character, Langley Garret, is viewed as a regular run of the mill guy at one point, then becomes a complicated part of a political scheme when he is kidnapped.

Readers have no idea what is going on because poor Langley doesn’t have a clue either. In Derek Haines true form developing his characters, his phenomenal writing style keeps his readers questioning the same things Langley is confused about.

In Eyes That Could Kill, Langley becomes our best friend. We route for him to figure out his predicament, that is while we are internalising (pun intended) why he thinks in terms of his internal organs, especially during some of his less friendly kidnapping ordeals.

Derek Haines showcases his expertise in letting his readers decide for themselves what his characters are all about. He is at his best writing Eyes That Could Kill because it has the most unpredictable ending for Langley Garret.

Mystery lovers will appreciate reading Eyes That Could Kill by Derek Haines, especially if they want to know if Langley Garret is successful unravelling his kidnapping.

Conspiracy buffs will enjoy this.

Sometimes a man has to bow to the inevitable. Reality is not always asked it seems. Nightmares may seem pleasant in comparison. In the end…. what really matters?

Not what I expected!

Eyes That Could Kill : When being abducted once, is just not enough …