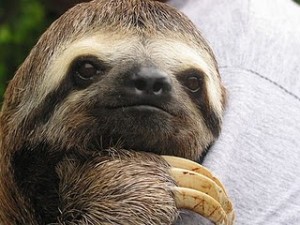 Some time ago, I wrote an epic piece promoting the idea of a World Day of Abject Laziness and how it could save the world. Since then however, I have had second and third thoughts about this noble plan and have decided to do some fine tuning to my idea.

As with most marketing ideas, you need a good visual to make an impact. I’m thinking WWF and a cute panda here. So after lazily contemplating this idea while gazing at my own navel and indulging in a plethora of procrastinated hours, I finally came up with a very simple idea. I needed a cute animal to help me promote my cause.

So I adopted ‘Slug’. My very own cute three-toed sloth.

Now my new friend Slug is a Maned Sloth just so you know. Kind, cute, marketable and chronically slow and lazy. Absolutely perfect for promoting my revised idea of a World Lazy Day, but now with an environmental, save the planet angle. All I have to do now is find a few generous sponsors and get the idea moving. Maybe some influential celebrities to promote the day and increase awareness. Perhaps I could even get some government funding or start a membership drive.

Then all I need is a new official name for the day, and make a decision about which date would be the best day in the year. So much to do to get an idea like this off the ground.

So much to do in fact, I really don’t think I can be bothered at all. Just can’t be stuffed moving. I really feel like a nap now. Maybe someone else will do it.

The Day Of The Sloth

5 thoughts on “The Day Of The Sloth”