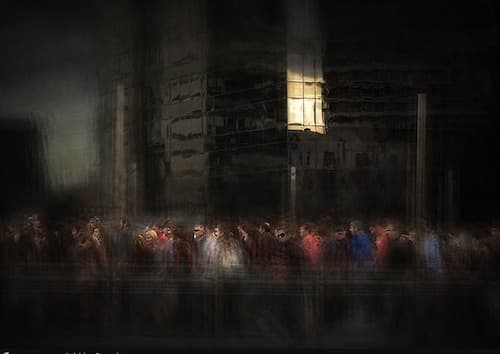 One of my favourite late 19th and early 20th century Australian poets is Henry Lawson. Here’s a taste of why.

Faces In The Street by Henry Lawson

They lie, the men who tell us, for reasons of their own,
That want is here a stranger, and that misery’s unknown;
For where the nearest suburb and the city proper meet
My window-sill is level with the faces in the street-
Drifting past, drifting past,
To the beat of weary feet-
While I sorrow for the owners of those faces in the street.

And cause I have to sorrow, in a land so young and fair,
To see upon those faces stamped the marks of Want and Care;
I look in vain for traces of the fresh and fair and sweet
in sallow, sunken faces that are drifting through the street-
Drifting on, drifting on,
To the scrape of restless feet;
I can sorrow for the owners of the faces in the street.

In hours before the dawning dims the starlight in the sky
The wan and weary faces first begin to trickle by,
Increasing as the moments hurry on with morning feet,
Till like a pallid river flow the faces in the street-
Flowing in, flowing in,
To the beat of hurried feet-
Ah! I sorrow for the owners of those faces in the street.

And then the only faces till the sun is sinking down
Are those of outside toilers and the idlers of the town,
Save here and there a face that seems a stranger in the street
Tells of the city’s unemployed upon their weary beat-
Drifting round, drifting round,
To the tread of listless feet-
Ah! My heart aches for the owners of that sad face in the street.

And when the hours on lagging feet have slowly dragged away,
And sickly yellow gaslights rise to mock the going day,
Then, flowing past my window, like a tide in its retreat,
Again I see the pallid stream of faces in the street-
Ebbing out, ebbing out,
To the drag of tired feet,
While my heart is aching dumbly for the faces in the street.

And now all blurred and smirched with vice the day’s sad end is seen,
For where the short “large hours” against the longer “small hours” lean,
With smiles that mock the wearer, and with words that half entreat,
Delilah pleads for custom at the corner of the street-
Sinking down, sinking down,
Battered wreck by tempests beat-
A dreadful. thankless trade is hers, that Woman in the street.

But, ah! To dreader things than these our fair young city comes,
For in its heart are growing thick the filthy dens and slums,
Where human forms shall rot away in sties for swine unmeet
And ghostly faces shall be seen unfit for any street-
Rotting out, rotting out,
For lack of air and meat
In dens of vice and horror that are hidden from the street.

I wonder would the apathy of wealthy men endure
Were all their windows level with the faces of the Poor?
Ah! Mammon’s slaves, your knees shall knock, your hearts in terror beat,
When God demands a reason for the sorrows of the street,
The wrong things and the bad things
And the sad things that we meet
In the filthy lane and alley, and the cruel, heartless street.

I left the dreadful corner where the steps are never still,
And sought another window overlooking gorge and hill;
But when the night came dreary with the driving rain and sleet,
Flitting by, flitting by,
Flitting by with noiseless feet,
And with cheeks that scarce were paler than the real ones in the street.

Once I cried: “O God Almighty! If Thy might doth still endure,
Now show me in a vision for the wrongs of Earth a cure.”
shutteredAnd in the warning distance heard the tramp of many feet,
Coming nearer, coming nearer,
To the drum’s dull distant beat-
‘Twas Despair’s conscripted army that was marching down the street!

Then, like a swollen river that has broken bank and wall,
The human flood came pouring with the red flags over all,
And kindled eyes all blazing bright with revolutions heat,
And flashing swords reflecting rigid faces in the street-
Pouring on, pouring on,
To a drum’s loud threatening beat,
And the war-hymns and the cheering of the people in the street.

And so it must be while the world goes rolling wound its course,
The warning pen shall write in vain, the warning voice grow hoarse,
For not until a city feels Red Revolution’s feet
Shall its sad people miss awhile the terrors of the street-
The dreadful, everlasting strife
For scarcely clothes and meat
In that pent track of living death – the city’s cruel street.

Faces In The Street

4 thoughts on “Faces In The Street”