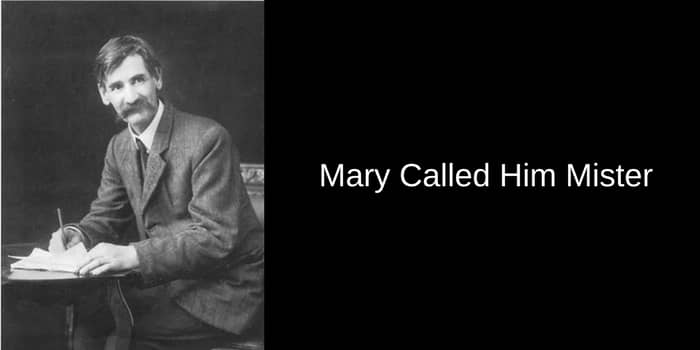 Every now and again I like to post a favourite Australian poem. So here we are again with an unusually light-hearted verse from the normally dark Henry Lawson.


They’d parted but a year ago – she thought he’d ne’er come back;
She stammered, blushed, held out her hand, and called him “Mister Mack”.
How could he know that all the while she longed to murmur “John”? —
He called her “Miss le Brook”, and asked “How she was getting on”.

They’d parted but a year before, they’d loved each other well,
But he’d been down to Sydney since, and came back such a swell.
They longed to meet in fond embrace, they hungered for a kiss —
But Mary called him Mister, and the idiot called her Miss.

He paused, and leaned against the door — a stupid chap was he —
And, when she asked if he’d come in and have a cup of tea,
He looked to left, he looked to right, and then he glanced behind …..
And slowly doffed his cabbage-tree….and said he “didn’t mind”.

She made a shy apology because the meat was tough,
Then asked if he was quite, quite sure the tea was sweet enough;
He stirred his tea, and sipped it twice, and answered “plenty, quite”.
And cut himself a slice of beef, and said that it was “right”.

She glanced at him, at times, and coughed and awkward little cough;
He stared at anything but her and said, “I must be off”.
That evening he went riding north — a sad and lonely ride —
She locked herself inside her room, and sat her down and cried.

They’d parted but a year before, they loved each other well —
But she was such a country girl and he’d grown such a swell;
They longed to meet in fond embrace, they hungered for a kiss —
But Mary called him Mister, and the idiot called her Miss.

One thought on “Mary Called Him Mister: Henry Lawson”