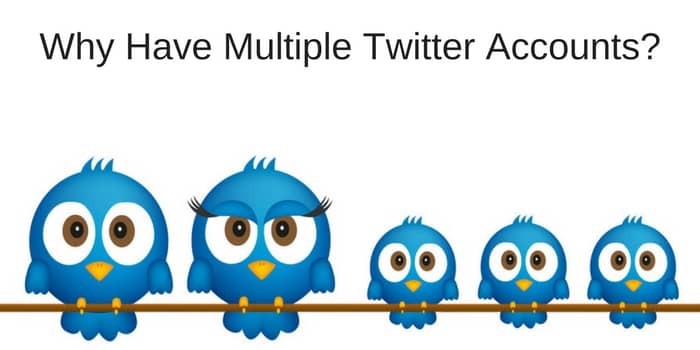 One radical difference between Twitter and other social media sites is the ability to have multiple Twitter accounts. So is this a good thing or an evil marketing ploy to deceive other users? Well, before I get started, let’s look at what the Twitter Rules say about this.

Serial Accounts: You may not create serial accounts for disruptive or abusive purposes, or with overlapping use cases. Mass account creation may result in suspension of all related accounts. Please note that any violation of the Twitter Rules is cause for permanent suspension of all accounts.

So it’s clear you can have multiple accounts as long as you don’t become ‘serial‘.

When I started out on Twitter, I began of course with my personal account @Derek_Haines and ran along quite happily. Then, sometime later with the release of a new book, I created @VampireAgatha with the view to promoting the book My Take Away Vampire.

Now, this account pretty much runs by itself so it’s fair to say it is an ‘automated’ account. The surprise for me was that I had expected perhaps a small number of followers for what is logically an impersonal account, but to date, it has over 35,000 followers.

A little later when it came time to release another book, I created @Febthe5th for my book February The Fifth. Following exactly the same set-up as my earlier book account, it has attracted over 40,000 followers. Again, with no personal input, by using automated postings related to the book and of course its author. Me.

So what’s the attraction for followers to my additional and robotic accounts?

Well, I’m still hunting for a definitive answer but I have a few ideas. One is that a lot of users are almost addicted to increasing their follower count and will add any account that follows back.

Then there are those who follow accounts that are related to their field of interest. For both of these additional accounts, the interests are logically books and reading. Then there are those who follow these accounts but may not be interested but simply forget or don’t bother to unfollow. Whichever is true, it means that these two accounts attract followers and their Tweets get read.

The next question is of course whether these accounts are effective. The answer is a definite yes. They serve to promote the two books so why would I stop? However, they also serve in promoting myself and my blog as both are clearly mentioned under the account profile for each of these accounts.

The decision to create multiple accounts is not for everyone as it does take some time to set them up, maintain and programme these accounts. But from a marketing perspective, they are well worthwhile and perfectly legitimate under the Twitter rules.