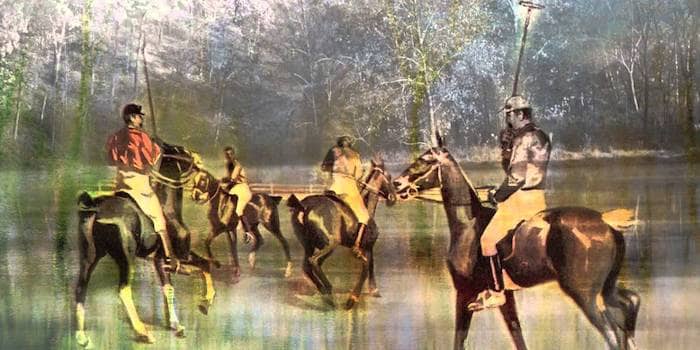 Some weeks ago I posted a taste of two of my favourite Australian poets, A.B ‘Banjo’ Patterson and Henry Lawson. So, as I did it once, I thought I would do it again, with one of my all time favourites.

It was somewhere up the country, in a land of rock and scrub,
That they formed an institution called the Geebung Polo Club.
They were long and wiry natives from the rugged mountainside,
And the horse was never saddled that the Geebungs couldn’t ride;
But their style of playing polo was irregular and rash —
They had mighty little science, but a mighty lot of dash:
And they played on mountain ponies that were muscular and strong,
Though their coats were quite unpolished,
and their manes and tails were long.
And they used to train those ponies wheeling cattle in the scrub:
They were demons, were the members of the Geebung Polo Club.

It was somewhere down the country, in a city’s smoke and steam,
That a polo club existed, called the Cuff and Collar Team.
As a social institution ’twas a marvelous success,
For the members were distinguished by exclusiveness and dress.
They had natty little ponies that were nice, and smooth, and sleek,
For their cultivated owners only rode ’em once a week.
So they started up the country in pursuit of sport and fame,
For they meant to show the Geebungs how they ought to play the game;
And they took their valets with them — just to give their boots a rub
Ere they started operations on the Geebung Polo Club.

Now my readers can imagine how the contest ebbed and flowed,
When the Geebung boys got going it was time to clear the road;
And the game was so terrific that ere half the time was gone
A spectator’s leg was broken — just from merely looking on.
For they waddied one another till the plain was strewn with dead,
While the score was kept so even that they neither got ahead.
And the Cuff and Collar captain, when he tumbled off to die,
Was the last surviving player — so the game was called a tie.

Then the captain of the Geebungs raised him slowly from the ground,
Though his wounds were mostly mortal, yet he fiercely gazed around;
There was no one to oppose him — all the rest were in a trance,
So he scrambled on his pony for his last expiring chance,
For he meant to make an effort to get victory to his side;
So he struck at goal — and missed it — then he tumbled off and died.

By the old Campaspe River, where the breezes shake the grass,
There’s a row of little gravestones that the stockmen never pass,
For they bear a crude inscription saying, “Stranger, drop a tear,
For the Cuff and Collar players and the Geebung boys lie here.”

And on misty moonlit evenings, while the dingoes howl around,
You can see their shadows flitting on that phantom polo ground;
You can hear the loud collisions as the flying players meet,
And the rattle of the mallets, and the rush of ponies feet,
Till the terrified spectator rides like blazes to the pub –
He’s been haunted by the specters of the Geebung Polo Club.

A Taste Of Aussie Poetry

One thought on “A Taste Of Aussie Poetry”