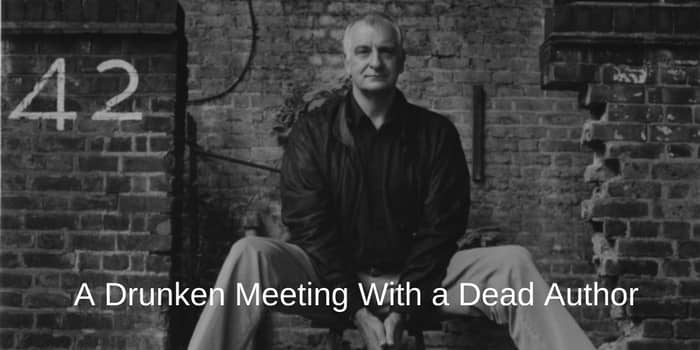 Oh Douglas, why did you up and leave us?

I had the occasion, albeit under the very heavy influence of a bottle or three of an extremely pleasant Shiraz, to stumble upon a rather tall gentleman with an odd outlook on life. Well, odd in the fact that he was rumoured to be dead, but we’ll come to that shortly. Although unsure at first, the presence of a towel slung casually over his left shoulder, a large open and half eaten packet of salted peanuts in his right hand and his asking if I had any beer gave me a clue. When I casually said, ‘Hey, you’re supposed to be dead!’, he just smiled and said, ‘Oh don’t panic.’

Now I was sure it was him. If I had any lingering doubts, they were brushed aside in an instant when I said, ‘It’s you, isn’t it?’ He told me that it was my drunken stupor, so he would happily be anyone at all.

‘So, this disappearing act in 2001? What was that all about? You didn’t even say goodbye or anything,’ I remonstrated. ‘Look,’ he said. ‘Ok, I meant to at the time, but just got carried away with things and, well, you know, the fish, dolphins and mice were having a bash on Earth Two. So, off I went. Not often one gets such an invite.’

‘So you just up and died to get there?’
‘No. I hitchhiked.’
‘To Earth Two?’
‘Weren’t you listening?’
‘Sorry. Um, so you didn’t die then.’
‘Clearly.’
‘Um, can I ask you something?’
‘Will it be silly?’
‘Probably.’
‘All right then, ask away.’
‘This 42 business. Did you think of it yourself, or did you steal the idea from  Lewis Carroll?’
‘I refuse to answer that! How dare you!’
‘So you did then.’
‘Well, er, yes. I did have 73 in mind at the time but it just didn’t have a nice ring to it. So I deleted 73 and got lazy and just popped in 42.’
‘But that’s plagiarism!’
‘No it’s not! You can’t plagiarise a number. How silly.’
‘Oh yeah. Sorry.’
‘Accepted. Now, any more stupid questions?’
‘Er, yes. Just one if you don’t mind.’
‘Ok, only one.’
‘Why are you back here?’
‘Oh, good question. I just popped back to pick up my Macintosh. Really have missed it. I’ve been having to write on a stupid holographic slate on Earth Two and it really gives me the pips. Things keep popping in and out and up and down. Most disconcerting.’
‘Why don’t you get a new Mac? A Macbook Pro. There’ve improved a lot since 2001.’
‘Can I have that beer now?’ he asked as he picked up his Macintosh and slung it under his arm. Keyboard dangling by its cord.
‘Sure. Here you go.’
‘Ta! Well, so long and thanks for the beer,’ was all he said as he disappeared from right in front of my very eyes.

I took another sip of my Shiraz. And wondered.

A Drunken Meeting With a Dead Author

13 thoughts on “A Drunken Meeting With a Dead Author”