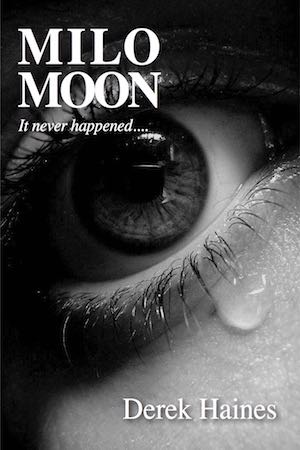 My last few months have been almost totally occupied by my new friend Milo Moon. Well, I suppose friend is taking it too far, as he is the main character in my new book. But such has been my focus, I feel he has been on my shoulder now for a very long time.

Although ‘parting is such sweet sorrow’, I think I will be happy to set him set free now and leave him to his own devices.

Within the coming days, Milo Moon will be released on Amazon and Barnes and Noble as well as in an e-book form on Kindle, Apple iBooks and Smashwords. The book will then be available very soon after, in other international online stores and local book shops.

So what it this book about I hear you ask.

In a nutshell it is a story of political expediency and secrets revolving around a human experimentation program that was kept from public view but supported by governments and corporations. Milo is one of the program’s ‘guinea pigs’ and he has suffered a life of physical and psychological medical experimentation.

Although the story’s subject matter is sordid, the story of Milo and his friends and acquaintances is touching and dappled with his sense of humour and acceptance of the world around him.

So keep your eyes peeled for the appearance of Milo Moon and I hope he has the chance to endear himself to you as he has done to me.