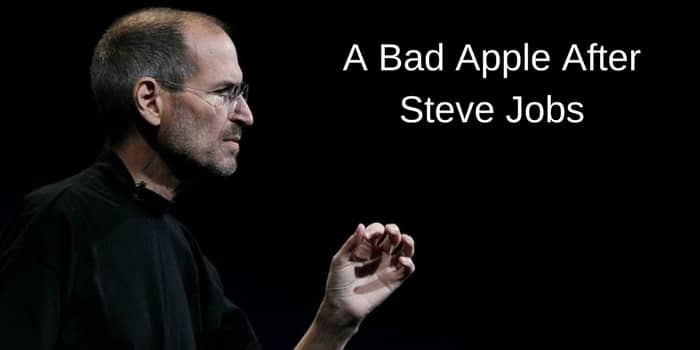 It was a sad day for me, as it was for millions I suppose when Steve Jobs passed away.

However, that was some years ago now, and I think I am well over my grieving.

It may be connected, but I think I am also over wantonly donating my credit card limit to Apple too.

After years of being an Apple freak, Apple aficionado and Apple devotee, I have recently completed my first whole 365 day year, totally free of an Apple purchase for the first time in quite a number of years. Not even a set of ear buds.

So why have I changed from being a mega-paying disciple to a parsimonious dissident? Because, perhaps due to Steve Job’s passing, Apple has, in only a few short years, lost its fearless daring, inventiveness and devil may care attitude, and in its place, has fallen into the grip of the Wall Street rules of doing business.

Instead of delivering wondrous products that we didn’t know we even needed, Apple now tinkers with what has been a success and exploits those past successes for as long as possible. This may make billions (Ireland domiciled, almost tax-free profit you bastards?) now, but Apple can toy around with trinkets and buttons until it gets to the iPhone 175s, but it won’t deliver anything new.

What’s new at Apple. Not much.

New? Ok, I’ve seen the Apple watch thingie, but really?Pppfft! I had a watch when I was four years old. New? What does it do? Tell the bloody time? Great! New and something I didn’t know I needed? I don’t think so.

I wonder if Steve Jobs is rolling in his grave, thinking that Dick Tracey did all that stuff such a very long time ago.

Taking a four-year-old iPad or iPhone and calling it SE, is not innovation. It’s exploitation. Why would I want to buy a four-year-old product, just because it’s available in a new colour? Innovation? Be damned.

Jobs may also be rolling in his grave about iCloud. This is the cloud service that replaced Apple’s last disastrous attempt at cloud services, MobileMe. When that was released and didn’t work, Steve Jobs asked this of his staff:

“Can anyone tell me what MobileMe is supposed to do?” Having received a satisfactory answer, he continues, “So why the fuck doesn’t it do that?”

Well, Steve, you can rise from the dead and ask the exact same question all over again about iCloud, because while it’s an improvement on MobileMe, Dropbox still leaves iCloud for dead.

It seems that my old iPhone 6, iPad Air and Macbook Air are all very safe from redundancy now, apart from the fact that they can’t sync with each other reliably via Apple’s shitty iCloud that is, so I have no idea where my precious photos are. Oh, and they aren’t a fancy colour. Rose gold anyone?

As there is nothing at all new and compelling coming out from Apple, my credit card will be totally secure from being raided by Apple for another few years at least.

Well, I do admit that I bought a new Macbook Pro, but couldn’t bring myself to buy the model with the Touch Bar. Why? Well, I just couldn’t think of a use for it, to be honest, so I don’t need it.

When Steve Jobs was alive, he somehow found ways to make stuff that I didn’t know I needed, but did. That was his genius.

It’s a sad thing to say after being an Apple disciple for more than thirty years, but Apple has lost its gloss, shine, crunch, imagination and daring. It has also lost its ability to make and sell products that ‘just work‘.

Many facets of Apple’s product range now, ‘just don’t bloody work‘. Such as my expensive new Macbook Pro that refuses to reconnect to the Internet when I wake it from sleep. My eight-year-old MacBook Air manages this simple task with ease.

Apple has become sadly, yet another mainstream home appliance manufacturer. It might as well make vacuum cleaners to extract a few more billions in Irish tax-free profits.

Apple seems destined to become a replica of Microsoft in the 80’s and 90’s, which preyed on its past success and monopoly for future profits. And we know the Vista of where that led.

Maybe I’ll buy something with a Samsung label on it in future if I want something new and different that ‘just works‘, but I doubt it will have any ‘wow‘ factor.

Or perhaps, as I’m getting on a bit now, it’s time to get over my boyish gadget fetish and start hoarding my hard earned money for a stylish walking stick.

But anyway, thanks for the memories, Steve.

A Bad Apple After Steve Jobs

24 thoughts on “A Bad Apple After Steve Jobs”