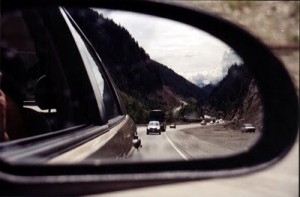 There comes a time in one’s life when you suddenly make a startling and altogether planet shaking discovery. One that will shape your mind for the rest of your living days and focus your thoughts on a new and as yet unplanned reality.

This particular discovery came to me in a blinding flash at exactly the same moment that I was driving my car on a freeway and about to overtake a slow moving rust bucket from somewhere in Eastern Europe. It looked a bit heavy in the back, so I interrupted my instantaneous earth shattering thought for a moment to wonder if the slow moving rust bucket from Eastern Europe might have been weighed down with my television and audio system. But then sense prevailed and I went back to my previous line of thinking.

Which was of course, to do with my previously planned overtaking manoeuvre. First checking my rear view mirrors for any possible travesty that might be approaching me from the rear. Then double checking them again two seconds later as a fail safe against my terrible short term memory. Following all this up with indicating my intention to change lanes and commencing my powerful acceleration stage. At that very moment, I moved my vision from the rear view mirrors and looked straight ahead through my windscreen insect cemetery.

And there it was! That altogether planet shaking discovery. This was an analogy.

I had reached that time of my life when mirrors become mathematics and dead insects become foretellers of one’s impending doom.

I realised that I have more of my life in my own personal rear view mirrors than I have in front of me through my windscreen. Yes. It was so simple.