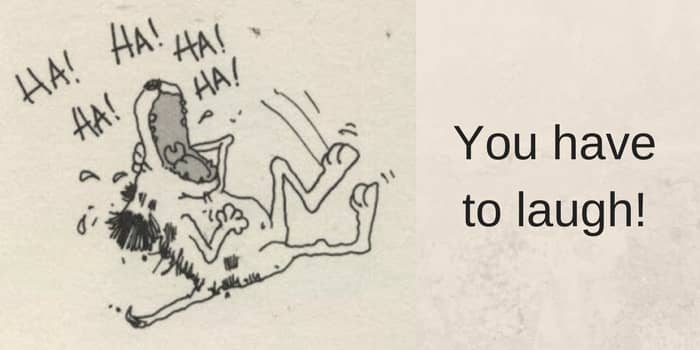 You have to laugh at life

My upbringing was very normal for the nineteen fifties and sixties in Australia. Boys were meant to be tough creatures who showed no signs of pain, suffering, confusion or emotion.

One emotion was permitted, however. That was, being happy and contented with life’s lot. The standard was set primarily of course by my father, who was the perfect role model, and by my male relatives, friends and peers. Being tough, hard, unemotional and without fear were the attributes of a real man.

I remember stubbing my big toe on a rock when I was about five or six. My toenail was pointing north, and there was blood gushing in abundance. There was pain in abundance as well. But before my first tears of pain had completed their gravitational journey down my cheeks, my father’s voice reminded me of my obligations. “Boys, don’t cry!” he said, as he doused my bleeding foot with cold water from the garden hose. This was accompanied by the sound advice to have our dog lick my toe as it would help stop the bleeding.

On another occasion, I managed to gash my leg on a rusty nail while climbing a picket fence at the back of our house on my way to my friend who lived behind us. Once again, there was blood everywhere and the screams of my friends, and myself, of course, attracted my mother’s attention. Naturally, she came running, saw the gaping wound in my calf, exposing my shin bone and proceeded to beat me vigorously on the backside while saying, “You father told you never to climb the fence!”

I am sure these two examples highlight the social conditioning I was accustomed to as a youngster. So, what was the result?

It was, and still is the best protection I have from crying my eyes out when pain, suffering, sadness, anxiety or grief threaten to overcome me. In memory of my parents, I can give you prime examples of how I habitually manage adversity with humour.

I was unfortunate enough to lose both my parents in the same year. They died within a few months of one another. My dad went first in May. Very suddenly. However, the poor bastard only had a measly five months peace and quiet before my mother got fed up with no one around to nag, and decided to up and die, just so she could get things back to what had been normality for fifty-five years. My poor father. He deserved a little longer.

Then, as Christmas approached for the first time without my parents, I suddenly realised the economy of losing them both. It was a much cheaper Christmas with two fewer gifts to buy and post. The silver lining of the black cloud of death. But then my daughter went and ruined it all by replacing my parents with grandkids, so the economy didn’t last very long.

The Comfort of Humour

5 thoughts on “The Comfort of Humour”