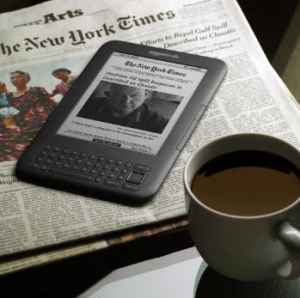 It is only a very short time ago that Apple’s ‘wonder god’ CEO Steve Jobs stated that the Kindle would fail. He was quoted as saying in January 2008 that ‘people don’t read anymore‘. Well, it would seem that even ‘wonder gods’ can get it wrong.

Perhaps now after three years he is rethinking the Kindle success. Strangely though, with all the hype about Apple’s successful iPad, the iBooks e-reader component appears to be a flop. The iBookstore is still only offering ‘free’ books outside the US, and sales of ebooks via the Apple bookstore are far from impressive. Added to that is the screen glare of the iPad that in my opinion makes it tiring on the eyes when reading for extended periods.

But going back to his idea that people read less nowadays, it probably should have been interpreted as referring to traditional books. That may have been or could be true, but since the advent of the Internet, people have been reading more and more. Just in a different way. Online reading has become very popular whether it be blogs, dedicated reading websites, newspapers or online book stores, people are reading. As much as video, image and audio are parts of the Internet product, text and therefore reading still dominates.

The only change has been that reading has moved from paper to a screen. Just as we moved from stone tablets to papyrus. So are you part of the Kindle success, or still a devotee of paper?