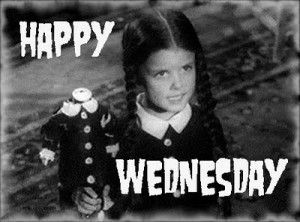 For those who have read Milo Moon, you will know that my dislike of Wednesday makes a grand appearance on the very first page. But what you may not know is the reason I dislike this day of the week so much. Some have mentioned that I was influenced by Douglas Adams and Arthur Dent’s dislike for Thursdays. For this I thank you and wish I had been so clever. But alas my dislike is at a different level.

Firstly, it is a nothing day. It is never mentioned in conversation as there is nothing really ever to talk about. Can you recall anyone saying that they couldn’t wait until Wednesday because they were meeting an old friend for lunch. I don’t think anyone even goes to the hairdresser on a Wednesday. It’s hardly the biggest party day of the week. Having your birthday fall on a Wednesday is an awful thing too. Roughly every seven years you really notice the lack of gifts you receive on a Wednesday birthday.

Then there is the fact that it falls smack bang in the middle of the week so you know there is just as long to the weekend as it was back to the one before. Who goes to the cinema on a Wednesday? A restaurant for dinner? I think most churches give it a big miss as well. Television channels have known about this phenomenon for years and only broadcast old repeated crud on a Wednesday evenings.

You could probably argue that Tuesday and Thursday are lamentably boring as well, but at least they are reasonably easy to spell. They are also the two great days of the week to take a phoney sick day off work as not even the the most suspicious of bosses would believe your were not very unwell.

In ending, I should tell you which day is my favourite. It is tomorrow. The day I do everything.