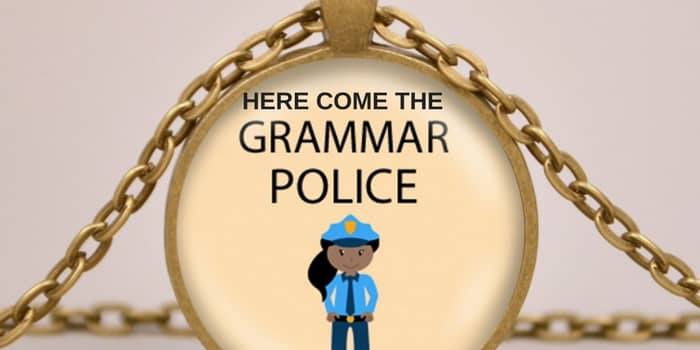 Over the years I have had my fair share of attacks by the Grammar Police, or as they are sometimes called the Grammar Nazis. They are a strange breed, as they obviously have little better to do than painstakingly read mountains of text, all in the hope of finding a missing full stop, (ok, period for my US friends) comma, or their favourite, an appetising spelling mistake.

Mostly, these Grammar commando attacks have been on my books, and of course, any decent Grammar Nazi immediately posts a review on Amazon to highlight my offending missing comma on page 211. Yes, I’ve had them all. Even one who punished me for my spelling, but was totally unaware that British spelling is an alternative to US spelling, and that it is indeed very correct. Mind you, the offending review about my horrid spelling was never retracted.

On my blogs too, but I must admit that bombing raids here have been less frequent, or fewer in number. Yes, less and fewer are a point of grammar that they adore, so I’ve used them both in the last sentence to protect myself from a missile attack.

In recent times, one particularly fussy amateur grammarian has made the news for making over 47,000 edits to Wikipedia to correct what he believes to be a mistake in using ‘comprised of’ instead of ‘composed of’. Talk about motivated and insanely pedantic! Of course, there is a lot of debate about whether he is correct. In my mind, it’s ok to use ‘comprised of’, but really, who cares?

Yes, they are a funny lot, but for the life of me, I simply don’t understand their fixation and motivation. Each to their own I suppose.

Which brings me to my most recent attack by an intrepid member of the Grammar Police. Unusually, this attack was on my website, which makes it a first. I was a bit peeved, to begin with, but after considering how long it must have taken to painstakingly read pages and pages of my website to finally find one tiny phrase, which the officer clearly told me ‘could have been worded better‘, I had to laugh. Obviously, my website had withstood the frontal onslaught of this grammatical blitzkrieg, but this officer couldn’t find a juicy misspelt past participle or even a tasty split infinitive.

Why do they bother?

Have You Been Attacked By The Grammar Police?

9 thoughts on “Have You Been Attacked By The Grammar Police?”