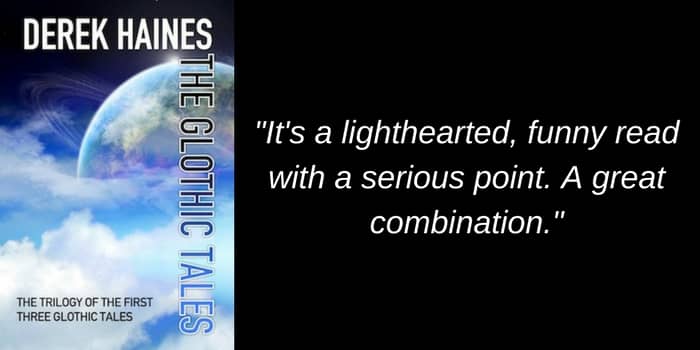 Ever since that fateful decision was made to descend from the trees, stand on two legs and eat fewer bananas, humans have looked back on the decision with regret. It was at that very moment in time, when we began feeling that we were being controlled. By who, why and how is today, just as much of a mystery as it was then.

As a species, we have lived our entire existence under constant control; by lords of the manor, governments, banks, moneylenders, faceless men in strange brotherhoods and manufactures of shiny objects that go beep and keep us amused for hours on end. The one unsolvable conundrum though, has been who controls those who control us?

The Glothic Tales attempt to answer this mystery once and for all, by detailing in three separate yet connected tales, the truth behind the truth, and the lies behind the lies. From the days of our free tree ancestors and their immediate and unfortunate enslavement, through to early beliefs of a higher authority, usually up in the sky somewhere, and then onto more organised, tyrannical and mysterious oppressors.

The insidious links between church and state, heaven and Earth, and why salmon and calendars were so important in all of this is explained in depth. There is a little travelling involved, as not all the answers were to be found on the ground. But don’t be fooled, these tales should not be viewed as works of science fiction, even though a lot of the adventures contained in them happen ‘up there‘. A lot happens in a place called Rom too, which is situated firmly on the ground.

If you have always wondered why things are as they are, then get ready to discover the truth when you meet up with February, Hal and Septimity in their trilogy of The Glothic Tales.

What Readers Say about The Glothic Tales

“It’s a lighthearted, funny read with a serious point. A great combination.”

“Douglas Adams has reincarnated and is living in Switzerland with wife and dog. Of course, he has a new name these days. It’s Derek Haines.”

“And by the way, if you ever find yourself visiting Erde, I recommend the salmon and when in Rom, well, eat the pasta!”

“Derek Haines entertains his readers with his two most amazing traits. First is his sense of humor, and second is his strength of building his characters even if they look like lizards!”

The Glothic Tales Trilogy : For those who have wondered why things are as they are …