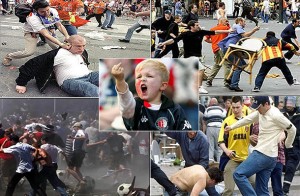 While there is no doubt at all that football, or soccer as it is called in some parts, is the world game and followed and played my millions. Often referred to as ‘The Beautiful Game’, it has a darker side that makes this title wear a bit thin.

It is an unfortunate fact that football attracts the ugliest of crowds for any sport in the world. Even here is peaceful Switzerland, crowd riots, acts of thuggery and gang styled street rampages are a standard weekend event for our police. Almost every country in the world suffers from this ugly sideshow to what is really a non-contact and non-violent sport.

So what is different about football? While I’m sure law enforcement authorities, FIFA and UEFA have studied this ugly side to the game, and try to take the best measures possible to minimise the ugly crowd behaviour, I have my own simplistic opinion as to the root cause.

In my mind it is the only major sport in the world where players show little or no respect for the referee. In other words, no respect for authority. Players in the major clubs across Europe, who are paid millions, act like spoiled children when penalised. Screaming and yelling at the referee every time he makes a decision. Serena Williams was roundly hounded for arguing with the referee at the US Open, and rightly so. In most sports, failing to abide by the referee or umpire’s decision results immediately in heavy fines or suspension.

Although rugby is one of the most physical of sports in the world, respect for the referee the opposing players and authority is unquestioned. As it is in so many sports.

It’s a pity that footballers have never understood this fundamental part of playing sport. Until they learn to show respect for their game, their opposition and the referee, there will never be respect shown from the terraces.