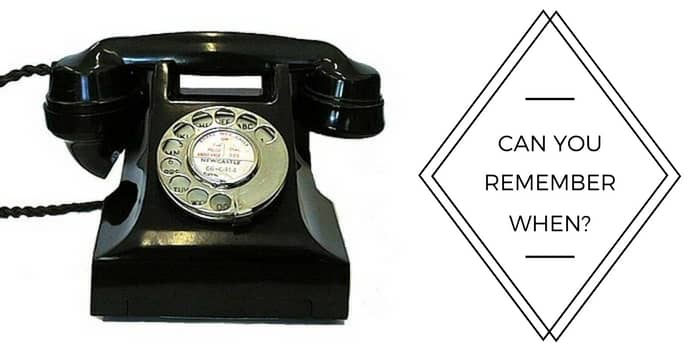 It’s easy to take things for granted, but it really isn’t so long ago that there was no Internet and faxes were the coolest communication tool going.

Growing up in a small city stuck on the far west coast or Australia, it’s also easy to remember a one newspaper town, a heavy black Bakelite telephone (yes with a dial!) and my local library as the only sources of information from the outside world.

But how times and means of communication have changed. As has the ease in finding information that was beyond my imagination just a short while ago; it is now just an everyday normality. All my wonderful cookbooks and recipe books are gathering dust as I use an iPad in the kitchen now and have access to a universe of recipes and cooking ideas. I’m watching television from not only around the world by cable, but also watching programs I have downloaded from my hometown. Not bad seeing as I live a half a world away now.

I now read opinion, ideas and beliefs from every corner of the world in an absolute instant from the time they were written. Newspapers from around the world publish their articles and they are on my iPad, iPhone or laptop seconds after publication. From being under-informed and hungry for information in my younger days, I’m now almost overloaded with it.

Then there are the multitude of ways of communicating. While I recall the mobile telephone of the 1980’s being a revelation, I now find myself talking to my kids, grandkids and family in Australia, from where I live in Switzerland now, on a daily basis via free audio and video calls from my mobile phone, Macbook and iPad. Incredible. In between, we exchange free text messages via iPhone and I get photos of my grandkids seconds after they were taken. All of this is so new and wondrous, but to my grandkids, it’s just normal.

My older grandson asked my younger one recently:

Where does Granddad live?
In the ‘puter!

Welcome to the new world. And ain’t it just wonderful!

Can You Remember When?

6 thoughts on “Can You Remember When?”