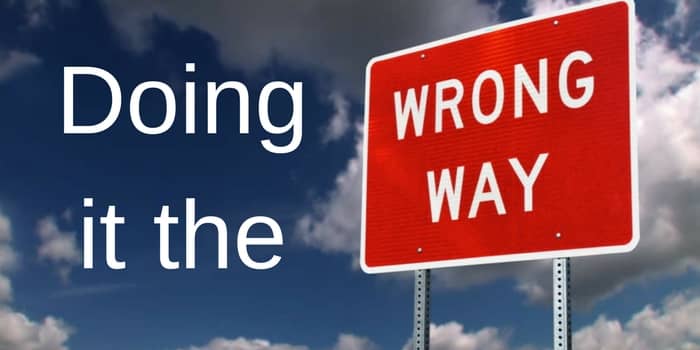 The wrong way can sometimes succeed

No matter how well you research, prepare and plan, there is still no guarantee of success. Similarly, however, when you do everything the wrong way, there is no absolute guarantee of failure.

I only draw your attention to these two points because I am presently in the process of evaluating two of my blogs: one of which was planned with breathtaking meticulousness, and this one, which simply came into existence a long time ago, and well, has just meandered its way through the years, doing everything that is considered wrong by blogging gurus.

Anyone who reads this blog will know that it has no central plank of authority, no defining market niche, nor a specific demographic readership in mind. It is just a blog that has wandered along for a long time without reason or rhyme.

On the other hand, my other publishing blog, which was designed after a lot of research, careful planning and with a defined readership in mind, and has targeted a specific market niche to which I hoped it would inform, solve problems and in general, do everything a good blog should do. In other words, I built my new blog by following all the rules.

But, I will give you about five seconds to guess which of these two blogs is my most successful, either by a measure of page views, subscribers or organic search queries.

Yes, you guessed right! Of course, this blog, The Vandal is more successful on all counts. It does it all wrong, but for some reason, it fails to fail.

In a round-a-bout way, this brings me to the topic of an article I read recently, about why self-published books fail when measured against traditionally published books. Or more to the point, why literary agents reject writers who do not follow the industrial formula of good writing. If a manuscript doesn’t follow the accepted formulaic rules of conflict creation and then disaster, then it is the wrong way and it will fail, so hence it is rejected.

The only problem with this argument is that it ignores the fact that self-published books have been a resounding success, and that writing the wrong way has served some authors very well indeed.

So as I said at the beginning, doing it the wrong way is not necessarily a recipe for disaster. It is often simply a way of finding a new path to success.

Doing It The Wrong Way