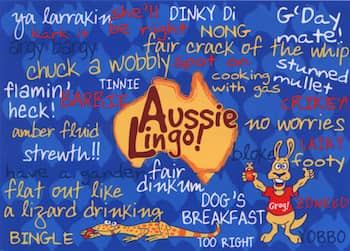 My recent post about Australian English and the tongue in cheek Australian Citizenship Test really had my inbox and twitter feed running hot with requests for a translation. So here it is. It is worth pointing out that Aussies love to contract words and use an ‘o’ or ‘ie’ to complete the contraction. Saves a lot of time. There are also words that may offend in some English cultures, but are classed as perfectly normal in Australian English.

Translation:
1. I can’t explain the origin however, an example is: Could you give me a ride to work? My car died in the arse and it’s at the mechanics. OR,
It had all the markings of a good movie/joke but the ending just died in the arse.
(When something breaks down, malfunctions, stops performing its allotted tasks, or generally just shits itself.)
2. A happy statement. ie: Doing something nice for someone and they exclaim, “You bloody little beauty!” It also pertains to our favourite team winning…etc.
3. No, they’re not.
A. To chuck a sickie means taking a day off from work/school when you’re not sick.
B. Chuck a spaz, is the same as throwing a tantrum.
C. chuck a U-ey means making a U-turn.
4.In the afternoon last Christmas, the relatives showed up for a B-B-Q, some beverages and a few sausages. After a bit of a Bex (headache powder) and a lie down (nap), we opened the presents and ate all the chocolates, biscuits (cookies) and candy. Then we drank a few beers and Mum got mad after Dad and Steve had an argument and a bit of a fist fight.
5. Macca, Chooka and Wanger (all mens’ nicknames) are driving to Surfers Paradise (a coastal city, in Queensland) in their Torana (make of Aussie car). If they are travelling at 100km/h (60 miles) while listening to Jimmy Barnes, John Farnham and AC/DC, how many boxes (of beer) will each person on average, consume between mooning and peeing?
6. Complete the following sentences:
a) If the van’s rockin’ don’t bother…knockin’.
b) You’re going home in the back of a…ute/panel van? (A ute is like a pick up truck)
c) Fair crack of the…whip.
7. I’ve had a gutful, means I’ve had enough…I can’t be fagged, means I just can’t be bothered.
8. Wedgie. A manoeuvre in which the administrator of the wedgie reaches into the back of the victim’s trousers, grabs the victim’s underpants, and pulls them up so that they form a wedge dividing the victim’s buttocks.
9. A car on blocks should be self explanatory…it’s up off the ground with no tyres. Names like Bruce and Cheryl are common but “lower” type names.
10. Mince meat is the same as ground beef..This is an Aussie recipe for a Chinese dish.
11. Beef mince
Eggs
Onion (grated)
Bread crumbs or bread soaked in milk
Plain flour
Salt and pepper
12. A Tim Tam is a chocolate coated wafer biscuit. It must be soaked in a glass of milk…then suck on it like a straw before you commence the nibbling process.
13. A heavy smoker who sounds like a man.
14, In any two-hour period have you ever eaten three bean salad, a chop (lamb or pork) and two serves of pavlova, followed by drinking someone else’s beer that was “stolen” from a bath tub full of ice? Instead of ice boxes (which we call, “eskies”) a lot of people just fill the tub with ice to keep the drinks cold.
15. The answer is yes…you can eat other peoples’ meat…sausages, steaks etc…but ask first.
16. Beetroot (known as “beet”in the States).
17. Pair of thongs are flip-flops, an esky is an icebox and ugg boots are akin to what the Inuits wear.
18. I’ll have to say yes, it’s possible. Prang means to crash and circle work, is going ’round and ’round in circles at top speeds.
19. “Crack on to” means to come on to someone.
20. Names of famous Aussie…could be any of them, except for Kylie Minogue (in my opinion ha!)
21. A mate is a buddy and a trailer is a little thing you tow behind your car…usually full of sand, tools or for taking rubbish to the tip.
22. “Sinkin’ piss at a mates joint” means, drinking beer at your friends place and “gettin’ para” means getting really f**ken drunk.