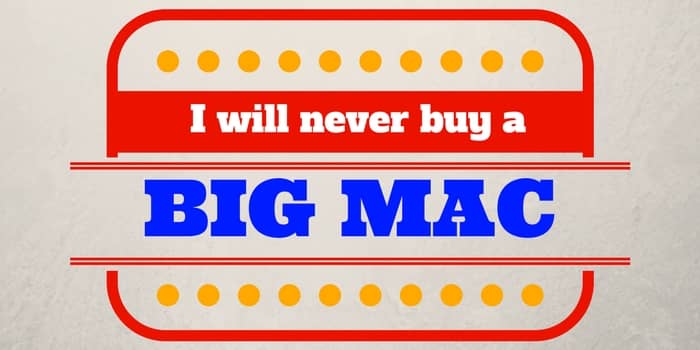 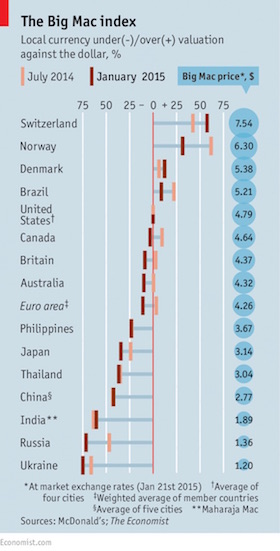 I avoid the Evil Empire of McDonald’s and the Big Mac. Here’s why?

Because here where I live, there is an even better reason to give the Golden Arches a big miss. No, it’s not that a Big Mac is chemical warfare against my internal digestive organs or that one bite can deliver inches on my waistline within minutes.

No. The reason I will not buy a Big Mac is that because I happen to live in Switzerland, a Big Mac will cost me a whopping $7.54! Yes, and the price doesn’t include fries and a Coke!

According to the Economist’s Big Mac Index, if I had the notion to buy a Big Mac, I would be much better off taking a short flight to Ukraine, where a Big Mac would only set me back $1.20.

Luckily, my aversion to fast food, and especially the Big Mac, which to me is so bland and tasteless that the little cardboard box it comes in probably tastes better and has more nutrition, saves me.

No Big Mac for me, and especially not at $7.54. To put this price in perspective, I can get a plat du jour here in a restaurant for around $14, which includes a salad starter, a hot main course, plus coffee and sometimes even a desert. Plus I get served, and get to sit at a table with a tablecloth, knives and forks and napkin!

No, food here where I live is not very expensive at all, even in a restaurant.

It is only a Big Mac that is. I call that globalised profiteering.

Oddly enough, in Japan where everything is frightfully expensive, a Big Mac is cheap at $3.14. Go figure!

Anyway, here’s a couple of more charts. How do you fare on the Big Mac Index? No Way Am I Buying A Big Mac!

One thought on “No Way Am I Buying A Big Mac!”