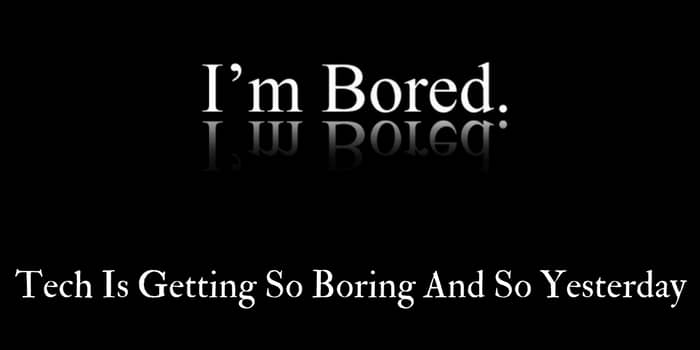 So what’s new in tech? Well, nothing much these days really.

Tech has come to a grinding halt on three fronts for me. The halt though, while extremely boring, is also saving me a lot of money. What’s boring is not worth buying.

I’ll start with Apple, who of course were everyone’s favourite company just a few short years ago. So cool were Apple, that people used to queue up for days in rain, snow and ice, just so they could be first to donate huge wads of cash to the Apple god of tech.

Today, however, where are the queues of Apple tech heads with fat wallets of cash? Like me, people have learnt the lesson. To reinforce the lesson, I saw a new iPhone this week in a store, and when I looked at it, it hardly differed from my three-year-old iPhone. My old phone works perfectly well, and apart from a new bit of chassis candy, the new and very expensive iPhone was exactly the same as mine. Well, except the new one didn’t have a plug for my earphones. Yes Apple, take away and try to charge me more. Do you think I’m that stupid?

Sorry Apple, I am not that dumb.

Staying with Apple, my Macbook Pro is getting on a bit now – well in techie years that is. But when I looked at possibly buying a new one online at the Apple Store, I couldn’t help but notice that there was hardly a shred of difference between my current Macbook Pro, and the new one on offer. Well except, again, a lack of holes to plug in the devices I use. Um, like my iPhone? WTF Apple?

Sure, there are probably a few new, faster bits inside, but who cares about all that nonsense. Mine works, so again, sorry Apple, I’m not that stupid. I’ll keep my money thanks.

The next tech stuck in the mud is Twitter. Oh Twitter how I love you, but dear me, you really are a very slow learner, and you are proving to be the real dunce of the techie class.

Six years ago the warning flashed in huge red letters for Twitter.

NEW TWITTER USERS GET CONFUSED AND BORED! THEN LEAVE. DO SOMETHING!

Sadly, Twitter ignored this warning, or perhaps in fairness, tried, but still had no clue as to how to change Twitter to become a new user-friendly platform. Like, it’s not rocket science, as every other social media platform has worked out how to be nice to new users, and keep them.

Okay Twitter, you have replaced the eggs with an odd little bubble human thingie. I’m sure that’ll help overcome all the confusion for new users.

Twitter is fantastic, but only if you spend a year learning how to use it. People don’t have time to waste, and Twitter still wastes new user’s time.

During the early years of self-publishing from 2010 to 2013, I had a great time publishing ebooks. Not only publishing but earning a nice side income as well. Then, though, things started to slow down.

Over the last year or so, the slowdown has started to almost turn into a grinding halt. Sure, everyone knows about Kindle, but unfortunately, this is the cause of the problem.

While Amazon has been hugely successful, it has managed to decimate most competition in the ebook market, and now hold what is practically a monopoly on ebooks. This has led to a lack of innovation, which is clearly demonstrated by the dramatic fall in sales of e-reading devices, including the Kindle.

Ebooks are tech, and without new features, they are just text on a screen. Ho hum. How uncool is black and white?

This is the result of Amazon’s ebook success, and with it, the destruction of any viable competition. And with no competition, there is no innovation. Only stagnation. And that is boring. Ebooks are boring.

Tech is getting oh so boring.

I’ll stop here because I’m bored. How about you?

Tech Is Boring And So Yesterday

6 thoughts on “Tech Is Boring And So Yesterday”